Two Fires Are Burning in California, A Massive Power Shutoff Leaves Nearly A Million in The Dark 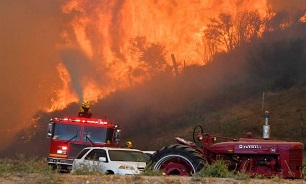 The Tick Fire, which is burning near Santa Clarita, had destroyed at least 16 structures by late Saturday and was threatening about 10,000 more, the Los Angeles County Fire Department said, CNN reported.

Officials are expecting dangerous rates of spread, extreme spotting of up to one mile and high flame lengths in the overnight hours into Sunday, Cal Fire Incident Fire Behavior Analyst Steve Volmer said in a news conference Saturday night.

In an attempt to avoid any more catastrophic wildfires, Pacific Gas & Electric (PG&E) began shutting down the power of about 940,000 customers Saturday night, citing a historic wind event in northern and central parts of the state.

The company had announced the shutoff earlier this week, citing their forecasts of dangerous wind conditions.

Customers in portions of 38 counties in the Northern and Southern Sierra Foothills, the North Bay and Mendocino, the Bay Area, the Central Coast and the Central Valley, will be left in the dark, the company said.

Paradise, which was devastated by last year's deadly Camp Fire, is also among the areas to be left in the dark.

"This (public safety power shutoff) action is based on forecasts of historic dry, hot and windy weather that poses a significant risk for damage and sparks on the electric system and rapid wildfire spread," PG&E said in a statement.

In San Jose, City Manager Kip Harkness told reporters the city has a plan in place for the outage, which could affect about 90,000 in the area. Officials said the city has activated a "power vulnerability plan" that has been months in the works.

Over the last weeks, the PG&E has been enacting preventative shutoffs all over northern and central California, but this could be the largest.

Earlier this year, the company warned it could proactively cut power more often during risky weather conditions as a means of preventing wildfires caused by high winds downing live power equipment. The preventive power outages may continue for a decade, the utility's chief executive said in a statement this month.

This all comes after the company came under fire and agreed to pay billions for its role in the 2018 Camp Fire -- California's deadliest and most destructive blaze.

The company previously said its "probable" that its equipment started the fire and an investigation by the California Department of Forestry and Fire Protection found the company responsible for the fire.

Officials were expecting the Kincade Fire to strengthen and spread into the early morning hours of Sunday.

The inferno had scorched more than 29,955 acres by late Saturday and was only 10% contained, Cal Fire Chief Jonathan Cox said during a news conference.

About 77 structures have been destroyed --31 of which were residential -- and 14 have been damaged, Cox said.

A mandatory evacuation was issued Saturday morning for more than 50,000 people in the path of the fire, according to officials. The evacuation area was expanded to an additional 39,000 people later that day, Sonoma County Sheriff Mark Essick said.

"Fire's not something you can fight," he said. "You cannot fight this, please evacuate."

In the southern part of the state, the Tick Fire was 55% contained and had burned through about 4,615 acres, the Los Angeles County Fire Department said.

The department said it was preparing for more wind Sunday and Monday.