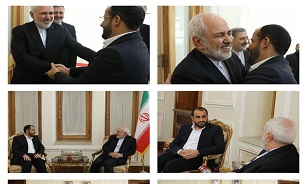 Speaking at the meeting held in Tehran on Saturday, Zarif expressed deep sorrow over the suffering of the Yemeni people and the Saudi blockade on the Country.

He further called for an immediate end to the killing of Yemeni civilians and the removal of the cruel blockade on them.

The Iranian top diplomat also described political solutions as the only way to resolve the Yemeni crisis, and voiced Tehran’s support for Yemeni-Yemeni talks and its readiness to send humanitarian aid to Yemen.

Abdul-Salam, for his part, expressed his gratitude to the Islamic Republic and briefed Zarif on the latest developments in Yemen.