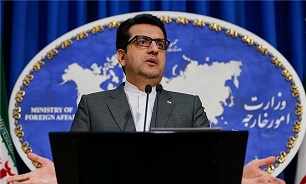 "Daeshism, terrorist and sectarian thoughts and extremism still exist and it has always been among the tools used by countries like the US," Mousavi said in an interview with the state TV on Sunday.

"We do not see the killing of Abu Bakr al-Baghdadi as the end of terrorism and the ISIL, and we warn that this way of thinking is still alive and their remnants might be reorganized by the Americans again to conduct sabotage operations in the region," he added.

Mousavi described the US hype over killing al-Baghdadi as not a so big achievement, noting that the US president means to make use of the incident in his election campaign.

"The ISIL was defeated by us (Iran) and the regional states; yet we should wait and see the next plot hatched by the enemies for the future of the region," he said.

Baghdadi died "whimpering and crying" in a raid by US special forces in northwest Syria, President Donald Trump claimed on Sunday.

Baghdadi killed himself during the raid by detonating a suicide vest after fleeing into a dead-end tunnel, Trump said in a televised address from the White House.

He was positively identified by DNA tests 15 minutes after he died, he said. "He was a sick and depraved man and now he's gone."

The Russian military on Sunday questioned the official US account of the military raid that killed al-Baghdadi, saying it was not aware of any US military operations in the region.

In a statement, Russian Defense Ministry spokesman Major General Igor Konashenkov said the Russian military “does not have reliable information” on a US Special Operations raid in Syria’s Idlib province, adding, “The increasing number of direct participants and countries that allegedly took part in this ‘operation,’ each one giving completely contradictory details, raises legitimate questions and doubts about its existence and especially the level of its success.”

In a statement that followed the raid, Trump thanked Russia for its assistance, as well as Turkey, Syria, Iraq and the Syrian Kurds.

Russia maintains a major base in Syria at Lattakia. Konashenkov said, however, that the Russian military had observed no strikes by US aircraft in the region.

“Firstly, on Saturday and in recent days no air strikes were made on the Idlib de-escalation zone by US aircraft or the so-called ‘international coalition’ were recorded,” Konashenkov said. “Secondly, we are not aware of any alleged assistance to the passage of American aviation into the airspace of the Idlib de-escalation zone during this operation.”

Konashenkov argued in his statement that Syrian government backed by Russian air power had defeated ISIL, saying that al-Baghdadi’s death “has absolutely no operational significance on the situation in Syria or on the actions of the remaining terrorists in Idlib”.