Damascus Back in Control over Vast Regions at Syrian-Turkish Border

TEHRAN (defapress)- The Syrian Army deployed a number of its troops in the Northern countryside of Hasaka province as part of its plan to counter Ankara aggression and defend the locals, further strengthening its military positions along the Syria-Turkey border.
News ID: 79123 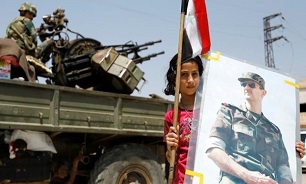 The Syrian government continued to deploy its forces to the Syrian-Turkish borders after Kurdish militias had retreated from the areas. The 90-kilometer deployment area straddles the Northeastern town of Ras al-Ein and Qamishli.

Kurdish militants started to withdraw on Sunday from the borderline. Damascus welcomes the withdrawal of the Kurds in Syria’s Northwestern regions to a depth of 30 kilometers from the Turkish border as part of a Russia-Turkey deal, saying the pullout rids Ankara of the pretext to keep up its acts of aggression against the Arab country.

Government forces have deployed several units to the Turkish border during the past week, and promised to reinforce their troops in the next few days.

Hours before a deadline for their removal expires on Tuesday, Turkey’s Defense Minister Hulusi Akar claimed that Kurdish forces have still not fully withdrawn from a strip of land in Northeast Syria from which Ankara says they must leave.

The Kurds had struck an agreement with the Syrian government in a move to be shielded against the Turkish onslaught. The agreement envisages the dispatch of Syrian government troops to the Kurdish-held territories to receive control and block the incursion of the Turkish Army and its allied militants. The Kurdish militias have already delivered control over a number of towns and villages to the Damascus army, including Manbij, Raqqa, and Ein Al-Arab (Kobani).

Last Tuesday, Russian and Turkish Presidents, Vladimir Putin and Recep Tayyip Erdogan, agreed after lengthy talks that Russian military police and Syrian servicemen will be deployed to Northeastern Syria, while Turkey’s operation ‘Peace Spring’ will continue in a limited area. Regions not affected by the Turkish military operation, will be jointly patrolled by the Turkish military and Russian military police up to 10km deep into Syrian territory.

Other parts of the Syrian border – from Kobani to Tel Abyad and from Ras al-Ein to the Iraqi border – are set to be controlled by the Syrian military and border guards, supported by Russian military police. Kurdish militias – the prime target of Ankara military operation – must withdraw into Syrian territory beyond 30km from the Turkish border.

Middle East experts believe that Russian-Turkish deal on security arrangements in Northeastern Syria is a major win for Moscow’s diplomatic approach, but Washington was hardly crushed by it.

Damascus has repeatedly reiterated that any foreign troops in Syria is regarded as an occupying force and the Syrian government has the right to take all the needed measures to confront it. The government of President Bashar al-Assad has for several times stressed that “every inch” of the Syrian territory will be liberated from terrorists.