US Veterans Demand Apology from Trump over Comments on Brain Injuries

TEHRAN (defapress)- Iranian Foreign Minister Mohammad Javad Zarif said that the role and efficiency of the Constitutional Committee in Syria must not be exaggerated, reminding that the body will have a long way ahead on the path to resolving disagreements and paving the way for realization of Syrians’ demands.
News ID: 79135 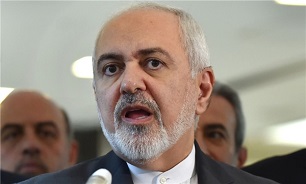 "The launch of the Constitutional Committee will happen tomorrow, and it will be a start of the long and difficult process of political settlement in Syria," Zarif said on Tuesday night in a joint press conference with his Russian and Turkish counterparts in Geneva.

Zarif, along with his Russian and Turkish counterparts Sergey Lavrov and Mevlut Cavusoglu, held talks in the Astana format in Geneva where they finally issued a joint statement. They discussed the situation in Syria and the launch of the Syrian Constitutional Committee which will hold its first session on October 30.

"The international community should support political settlement of the Syrian conflict. There is no military solution to the Syrian crisis," the top Iranian diplomat said.

"It is important that this process is acceptable for Syrian people and will represent the result of their own efforts and work, and not imposed from outside," he added.

However, it is important "not to over-estimate the significance of the Constitutional Committee whose task is to improve the constitution," he noted. "There are other issues, including the humanitarian problem, the issue of prisoners and refugees, who should successfully return to their homes," he concluded.

The Iranian diplomatic chief then highlighted that Iran and Russia’s presence in Syria is upon the official invitation of Damascus and the presence will continue as long as Syrian people and government want so.

"The process of political resolution of the Syrian crisis became possible thanks to guarantors in the Astana process [Russia, Iran, Turkey] and efforts by UN Special Envoy for Syria [Geir Pedersen]," he noted.

Zarif noted the importance of the fact that “all three states insist on maintaining Syria's territorial integrity”.

"Iran is confident that Syria's territory should be controlled by the Syrian forces and government, which will bear responsibility for ensuring security in the country and along borders," he stressed.

The Syrian Constitutional Committee was formed in accordance with the resolution adopted in January 2018 by the Congress of Syrian National Dialogue in Sochi. The Committee will include 150 people (50 delegates each from the government, opposition and civil society organizations). Each group will appoint 15 experts to participate in sessions of the "draft commission" which will be held behind closed doors in Geneva. The first session of the Syrian Constitutional Committee will be held on October 30.

Elsewhere in his remarks, Zarif went on to refer to the presence of US troops in Syria with the pretext of protecting oil fields, hinting that President Trump is at least honest about US aims.

During the recent weeks, 1,000 American forces retreating from Northern Syria have walked into Nineveh province in Northern Iraq, where they will continue their seemingly endless military presence in the region. It comes after Trump pompously declared it was “time to bring our soldiers back home”. Then, he changed his mind once again and stated that certain troops will stay, supposedly to prevent the Syrian oil fields falling into the hands of the ISIL terrorist group.

Meanwhile, Russian Defense Ministry Spokesman Igor Konashenkov said on Saturday the United States was indulging in smuggling Syrian oil to other countries. He added that the convoys were guarded by US private military companies and special operations forces and oil extraction equipment had been supplied to the site by leading Western corporations in bypassing of all US sanctions.

According to Konashenkov, the contract for transporting oil was executed by the US-controlled company Sadcub set up under the so-called autonomous administration of Eastern Syria. Under the defense ministry’s estimates, the cost of one barrel of oil smuggled from Syria is $38, so monthly revenues of such "private business" exceeds $30mln.

While Washington claims that the move is in the line with its alleged anti-terror campaign in Syria, analysts see it no more than an excuse to impose control over Syria's oil revenues, reminding that the US was well informed of the hazards of ISIL's revival when it abandoned the Kurdish militants and paved the ground for Ankara to conduct its long-waited military incursion into Northern Syria.

On Monday, American mechanized forces began deploying at Syrian oil fields, ostensibly to stop the remnants of the ISIL from seizing them, and will respond with “overwhelming force” to protect them.

Following the withdrawal of US forces from Northern Syria earlier this month, and the killing of ISIL leader Abu Bakr al-Baghdadi on Saturday night, American forces in Syria apparently have a new mission: protect the oil.

Secretary of Defense Mark Esper said at a press conference on Monday that American mechanized forces have already deployed to protect oil fields in Eastern Syria.

The mission, on its surface, aims to keep these oil fields in the hands of the Kurdish-led Syrian Democratic Forces (SDF), Washington’s former allies in the fight against ISIL.

The American troops, he noted, will “respond with overwhelming military force against any group who threatens the safety of our forces there”.

When asked whether the US would potentially respond with force against Russian or Syrian forces, Esper simply responded “yes”.

Esper’s apparent threat comes hot on heels of Moscow accusing the US of facilitating the oil smuggling in Syria. Russian Defense Ministry Spokesperson Major General Igor Konashenkov called the US oilfield operation “state-sponsored banditry”, and accused Washington of leaving its forces there to help oil smugglers pillage Syria’s national resources. The defense ministry published aerial images on Saturday, that it claims show crude oil being smuggled out of the country “under the strong protection of the US”.

Though much noise has been made about protecting the oil fields from the remnants of ISIL, the shattered militant group has not made any moves towards seizing them.

Asked whether the fields and the American forces there were under any threat, Esper replied “not at this time”.

President Donald Trump had previously promised to bring all of the 1,000 or so US troops in Syria home, after the withdrawal from the country’s North. However, some will be moved to Iraq, while more will now remain behind at the oil fields. It is still unclear how many troops will stay in Syria.