Iran's Judiciary Chief Blasts US for Destructive Role in Region

TEHRAN (defapress)- Iran's Judiciary Chief Seyed Ebrahim Rayeesi lashed out at Washington for pursuing a seditious policy in the Middle East, saying that the US is implicated in all miseries and crimes in the region.
News ID: 79149 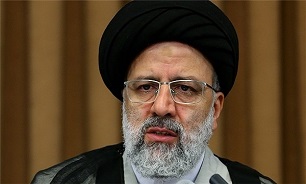 Speaking on Thursday in Tabriz, the regional capital city of Northwestern province of East Azerbaijan, Rayeesi said that all the crimes in the region are committed by the US.

"Americans have face failure in all the measures they have taken against us and if they do not do anything more it means they can do no more," he said.

On Tuesday, Iranian Foreign Minister Mohammad Javad Zarif reassured that all Washington’s efforts to have an arrangement about regional issues will require Tehran’s presence, underlining that the US will be unable to exclude the Islamic Republic.

Speaking in an interview with the Doha-based television network Al Jazeera, on the sidelines of his presence in the Arab state of the Persian Gulf for attending the annual Munich Security Conference (MSC), Zarif lashed out at the United States for pursuing such a fruitless strategy, and added that Washington’s policy of excluding Iran “from any regional arrangement - whether in Syria, Afghanistan or Yemen - will just not work”.

The topo diplomat of Iran once again emphasized that US sanctions against Iran have “failed”.

Last month, Zarif derided the US for labeling its anti-Tehran initiative in the region as “peaceful”, offering a list of 8 peace proposals put forward by the Islamic Republic between 1985 and 2019.

In a tweet on September 20, Zarif slammed the US' proposed "Coalition for Peaceful Resolution" seeking to "counter" Iran with putting a question mark next to the title.

The top diplomat compared the US-backed initiative to a list of 8 peace initiatives proposed by Tehran between 1985 and 2019.

Zarif posted the tweet a day after Washington said it was seeking to create an anti-Iran coalition. US Secretary of State Mike Pompeo had described the initiative as a "coalition aimed at achieving peace."

Washington's so-called "coalition" announcement came in response to an attack led by Yemeni Armed Forces against Saudi Arabia's oil facilities over the weekend.

Washington and Riyadh rushed to blame Tehran for the air raids, prompting an outright rejection from Iranian officials.

Iran holds that the US is playing a destructive role in the region with stoking tensions, and practicing a double-standard policy.

Last Month, President Rouhani said that foreign military presence in the Middle East has put energy security and peace in serious danger, adding that trans-regional forces should leave the region if they are honestly concerned about security.

Calling upon those who claim to be worried about security in the Middle East, Rouhani said, “If they are telling the truth, they’d better not turn the region into a stage of arms race … if they are after [establishing] security, they’d better get out of the region.”

He went on to say that the attempts by those who try to pin the blame for regional incidents on the Islamic Republic are “just like all of their exposed lies.”

Back in August, Rouhani lashed out at superpowers, particularly the US, for meddling in the internal affairs of the Middle East and Latin America, stressing that the two regions are having problems because of trans-regional interferences.