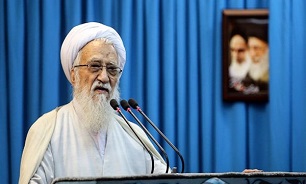 Addressing a large and fervent congregation of the people in Tehran on Friday, Ayatollah Movahedi Kermani said, “The Iraqis and Lebanese people must appreciate the security of their country and be vigilant in the face of enemy's plots to create sedition and divisions among different ethnic groups in the two countries.”

The senior cleric reiterated that the enemies of Iraq have not been idle, and in some cities, especially in Basra and Amarah, violence has taken place, targeting the innocent people, killing many and injuring others.

In relevant remarks on Wednesday, Ayatollah Khamenei advised well-wishers of Iraq and Lebanon to find a way out of the current insecurity.

“The biggest harm that the enemies can inflict on a country is to harm its security, what they are doing in some countries of the region is to deprive the people of security,” said Ayatollah Khamenei in a ceremony held for graduation and oath-taking of cadets at Khatam al-Anbia Air Defense Academy.

The Supreme Leader noted that more than anything, the US and some Western intelligence services, are stirring up disorder, with the money from some reactionary regional countries, which is the worst detriment and the most dangerous hostility to a nation.

The Supreme Leader said that their people have some righteous demands, but, they should know that their demands can be reached in the legal frameworks.