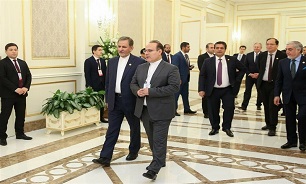 The Iranian vice president was officially welcomed by Uzbekistan’s deputy prime minister on Saturday morning at Tashkent’s Koksaray Complex, where the SCO meeting is being held.

Jahangiri is going to deliver a speech to the meeting on the importance of regional organizations and the need for fighting against unilateralism.

The Shanghai Cooperation Organization is a Eurasian political, economic, and security alliance, the creation of which was announced on June 15, 2001 in Shanghai, China by the leaders of China, Kazakhstan, Kyrgyzstan, Russia, Tajikistan, and Uzbekistan.