‘I Like Oil, We’re Keeping Oil’: Trump Confirms US Wants Syria’s Oil, Not to Patrol Its Borders

TEHRAN (defapress)- US President Donald Trump reiterated the US’s lack of interest in patrolling the Syrian-Turkish border, stressing that Washington’s main interest was in controlling the country’s oil.
News ID: 79172 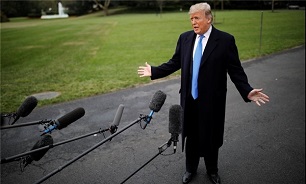 “The ceasefire has held very nicely. We’ve kept the oil. We’ve stayed back and kept the oil. Other people can patrol the border of Syria, frankly, and Turkey, let them - they’ve been fighting for a thousand years, let them do the border, we don’t want to do that," Trump said, speaking to reporters on the White House lawn on Friday, RIA Novosti reported.

Secretary of Defence Mark Esper has also confirmed that the US plans to continue controlling Syria’s oil fields, and to prevent them from falling into the hands of terrorists or “other actors”.

“The mission is, as I’ve spoken to and I’ve conveyed it to the commander, and that is, we will secure oil fields to deny their access to ISIS (also known as ISIL or Daesh) and other actors in the region, and to ensure that the [Kurdish-led Syrian Democratic Forces] has continued access, because those resources are – are important, and so that the SDF – can do its mission, what it needs to do in the region,” Esper stated, speaking to reporters on Thursday after meeting with Australian Minister for Defence Linda Reynolds.

Prior to his comments Friday, Trump had repeatedly referred to the need to secure and hold Syria’s oil resources. He has repeatedly criticised US foreign policy during the 2016 campaign, and even during his days a private citizen. In 2011, Trump urged the Barack Obama administration to keep troops in Iraq and “keep the oil”. In 2016, he reiterated the need to “take the oil” in Iraq, saying the move would be “reimbursing ourselves”, and “not stealing”.