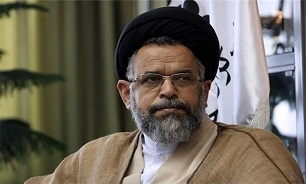 On the occasion of the 40th anniversary of the 1979 takeover of the US embassy in Tehran, Mahmoud Alavi, Iran’s Intelligence Minister, said that November 4, 1979 humiliated the fictitious grandeur of US leaders.

On November 4, 1979, a group of university students took over the embassy, which had turned into a center of espionage, plotting to overthrow the nascent Islamic Republic, and held 52 American diplomats for 444 days.

Documents found at the political mission corroborated claims by the revolutionary students that Washington had been using the compound to hatch plots against Iran.

November 4, which falls on the 13th day of the Iranian calendar month of Aban, is also known as the Student Day and the National Day of the Fight against Global Arrogance.

Anger toward America had already been growing throughout 1979 as Iran’s revolutionary government took hold, but it boiled over in October when the United States took in the ailing shah for medical treatment.

Many of those sentiments remain today amid the escalating tensions between Tehran and Washington, following the US withdrawal from the 2015 nuclear deal and subsequent sanctions that have hit ordinary Iranians hard.