Hezbollah to be part of upcoming Lebanese government

TEHRAN (defapress) – Hezbollah Deputy Secretary-General Sheikh Naim Qassem stressed that Lebanon is in need of real efforts to improve the various conditions, and Hezbollah will be part of the upcoming Lebanese government.
News ID: 79226 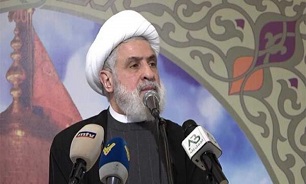 Sheikh Qassem underlined that the public protests have caused major changes in the country, reiterating Hezbollah's undeniable role in the new government because it represents a major segment of the Lebanese people, adding that the party will always address the socio-economic needs of the people, Al-Manar TV reported.

On October 17, dozens of thousands of protesters took to streets in rejection of the government’s tax policy.

The Lebanese Finance Ministry says the national debt is hovering around $85 billion, which accounts for more than 150 percent of the gross domestic product (GDP).

Successive governments have failed to address a waste management crisis or improve the electricity grid, which is plagued by daily power cuts.