TEHRAN (defapress) – Former US ambassador to the United Nations Nikki Haley predicted that President Trump will not be impeached, and likened the House’s investigation into his dealings with Ukraine to a “death penalty.”
News ID: 79233 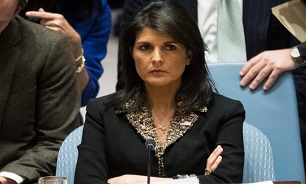 “You’re going to impeach a president for asking for a favor that didn’t happen and — and giving money and it wasn’t withheld? I don’t know what you would impeach him on,” Haley told CBS anchor Norah O’Donnell in an interview set to air this weekend.

The White House has repeatedly characterized the House investigation as a "witch hunt," and last week decried Democrats' efforts as "unhinged" after they voted to formalize the inquiry.

Democrats have countered that the president abused his oath of office by seeking to involve foreign nations in US domestic politics, and point to testimony from several witnesses who have said there was a quid pro quo surrounding Trump's dealings with Ukraine.

“The Ukrainians never did the investigation. And the president released the funds," she said. "I mean, when you look at those, there’s just nothing impeachable there.

“And more than that, I think the biggest thing that bothers me is the American people should decide this," she added. "Why do we have a bunch of people in Congress making this decision?”