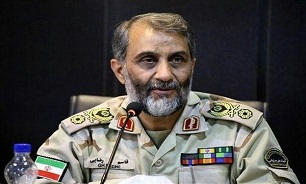 Speaking to reporters during a visit to the border areas of Iran’s Sistan and Balouchestan province on Saturday, Brigadier General Qassem Rezaei said the Iranian and Pakistani border guards have established an agenda for protecting the common border after consultations between the two countries’ officials.

He said the joint efforts between the two neighbors have facilitated trips by Pakistani pilgrims at the Mirjaveh border crossing.

The commander also unveiled plans for the promotion of cooperation with Pakistan’s coast guard in order to ensure security along the common sea border.

In April, Iranian President Hassan Rouhani and Prime Minister of Pakistan Imran Khan agreed to set up a joint rapid reaction unit along the common border to combat terrorism.

In February, a bus carrying IRGC personnel was traveling between the cities of Zahedan and Khash in Sistan and Balouchestan, when it was targeted in a suicide car bomb attack.

Twenty-seven IRGC members were killed and 13 others injured in the attack, claimed by the so-called Jaish ul-Adl terrorist group based in Pakistan.