Syria Army Retakes Area in Northeast after Clashes with Militants

TEHRAN (defapress) – Syrian forces managed to retake a village in the country’s northeastern province of Hasakah from Turkish military forces and their allied militants after intense clashes.
News ID: 79238 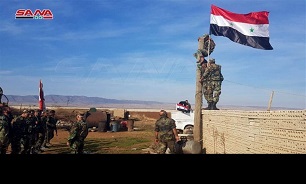 Syria’s official news agency SANA reported that heavy skirmishes broke out on Saturday afternoon when the Turkish forces and their mercenaries launched an offensive against the village of Um Shuaifeh near the border with Turkey.

It said the battles involved heavy and medium weapons, adding that Syrian army soldiers finally managed to liberate the village and establish full control over it.

They forced Turkish forces and their allies to retreat towards the village of Mahmudiya, SANA said, without providing any information about possible casualties.

On October 9, Turkish military forces and Ankara-backed militants launched a long-threatened cross-border invasion of northeastern Syria in a declared attempt to push militants of the People's Protection Units (YPG) from border areas.

Ankara views the US-backed YPG as a terrorist organization tied to the homegrown Kurdistan Workers' Party (PKK), which has been seeking an autonomous Kurdish region in Turkey since 1984. The YPG constitutes the backbone of the Kurdish-dominated so-called Syrian Democratic Forces (SDF).

On October 22, Russian President Vladimir Putin and his Turkish counterpart Recep Tayyip Erdogan signed a memorandum of understanding that asserted YPG militants must withdraw from the Turkish-controlled "safe zone" in northeastern Syria within 150 hours, after which Ankara and Moscow will run joint patrols around the area.

The announcement was made hours before a US-brokered five-day truce between Turkish and Kurdish-led forces was due to expire.