TEHRAN (defapress) – President Hassan Rouhani arrived in Rafsanjan, Kerman Province, on Mon. morning in the course of his provincial tour after his Sunday visit to Yazd.
News ID: 79253 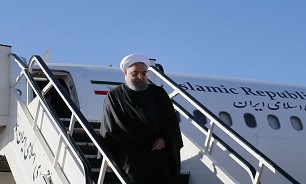 During his two-day visit to Rafsanjan, as many as 20 projects valued at 150,000 billion rials will come on stream, creating some 2,500 direct jobs for local people, according to the report.

One of the projects to be officially inaugurated during Rouhani’s visit is the Baft Steel Complex.

Speaking upon arrival in Rafsanjan airport, Rouhani said his visit also aims at following up on the progress of projects approved by the government in its previous visits.

He voiced hope the visit today would bring further development and prosperity for the people of Kerman province as well as the entire Iranian nation.

Rouhani is scheduled to address the people of the province at Rafsanjan’s Takhti Stadium in a few hours.