US Has Prevented Lebanon from Standing on Its Feet, Nasrallah Says

TEHRAN (defapress) – The secretary-general of the Lebanese Hezbollah resistance movement said Americans are exploiting the ongoing mass protests in the Arab country to fulfill their own interests and advance their agenda, stressing that Washington has prevented Lebanon from standing on its feet.
News ID: 79259 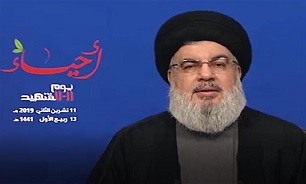 "Americans are taking advantage of the demonstrations for their own interests,” Seyed Hassan Nasrallah said in a televised speech broadcast live from the Lebanese capital city of Beirut as he addressed his supporters on Monday evening, adding that the United States ignores social realities in Lebanon, including poverty and unemployment, and only focuses on the continuation of protests.

The leader of the Lebanese resistance movement further said that demonstrations in the country have made the Lebanese more united than ever in their fight against corruption, adding, "The ongoing protests in Lebanon prevent any political faction from protecting those involved in corruption crimes."

The Hezbollah leader emphasized that the campaign against corruption requires impartial and honest judiciary and mechanisms to restore the stolen money, adding, "Let the court start trying Hezbollah members, and I pledge to lift the impunity of the party’s ministers and members of the parliament."

He highlighted that Lebanon’s manufacturing sector is terribly suffering from inefficiency and lack of productivity, arguing that the United States is creating obstacles for the direct investment and smooth operation of Chinese firms in Lebanon.

Nasrallah went on to say that US threats to impose sanctions and punitive measures on participants in Syria's reconstruction have deterred Lebanese companies from taking part in the process.

“US sanctions have hampered the growth of Lebanon’s economy. The United States has even blocked economic routes between Lebanon and Iraq. It has not allowed the opening of the border crossing – which connects the town of Bukamal in Syria's northeastern province of Dayr al-Zawr to the city of Husaybah in the al-Qa'im district of Iraq's western province of Anbar – despite repeated appeals by Iraqi Prime Minister Adel Abdul-Mahdi,” the Hezbollah chief said.

“Americans are doing their best in order to exert unrelenting economic pressure on Lebanon,” he highlighted.

Pompeo wrote on his Twitter page on November 5 that the people of Iraq and Lebanon have a right to free themselves of Iranian influence.

The Hezbollah secretary-general also noted that the possibility of any US war on Iran has reduced by 99.99% and that the Islamic Republic has remained steadfast in the face of US pressures and those of Washington’s allies.

"Iranians have gone through the toughest economic times and remain steadfast against the pressures exerted by the US and its allies," Nasrallah said, adding that the recent discovery of a huge oil field in southwestern Iranian province of Khuzestan could be a major boost to the country's economy.

“(US President Donald) Trump is only after oil and money. He is ready to betray its own allies when his interests are at stake,” Nasrallah said, asserting that the recent discovery of oil in Iran will make Trump very sad.

Nasrallah said contacts and consultations are underway among various Lebanese political parties in order to form a new government in the country.

“People from different strata of the Lebanese society should overcome their bitter divisions, and focus on national consensus instead.

“Fighting corruption is the main achievement of the latest developments in Lebanon... Corrupt officials should be punished duly. All Lebanese people should contribute to the fight against corruption through full cooperation with the judiciary,” Nasrallah said.

Elsewhere in his remarks, the Hezbollah chief hailed the recent comments by the leader of Yemen’s Houthi Ansarullah movement, Abdul-Malik al-Houthi, that the Yemeni people will not hesitate to deal a stinging blow to Israel in case the Tel Aviv regime commits the folly of attacking Yemen.

"Although Yemen has been under the Saudi-led aggression for five years, Houthi threatened the Israeli enemy of responding to any attack."

“Yemeni forces have built up a great military power and this further strengthens the axis of resistance in the entire (Middle East) region. Even though Yemen has been devastated by the Saudi-led aggression for more than five years, the Yemeni nation has proved that they will not give in to pressures,” Nasrallah said.