Israel’s attacks on Syria confirm its full coordination with terrorists

TEHRAN (defapress) – The Speaker of the People's Council of Syria, Hammouda Sabbagh, said in a meeting with an Iranian parliamentary delegation that Israel’s attacks on Syria are the regime’s desperate attempts to support the terrorists there.
News ID: 79266 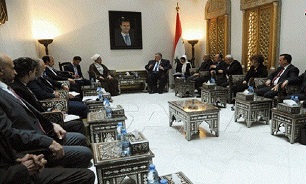 The Chairman of Iranian Parliament’s National Security and Foreign Policy Commission, Mojtaba Zonnour, and his accompanying delegation, held a meeting with the Speaker of the People's Council of Syria, Hammouda Sabbagh, in Damascus on Tuesday.

During the meeting, Sabbagh pointed out that the repeated attacks by the Israeli regime on Syrian soil confirm its full coordination with its terrorist mercenaries in Syria.

He said that the attacks are launched by the Israeli regime in a desperate attempt to back up the terrorists every time the Syrian Army is engaged in a fight against them, according to SANA's Arabic website.

He then pointed to the existing cooperation and coordination at all levels between the People's Council of Syria and the Iranian Parliament, stressing full solidarity with the Iranian people and their leadership in the face of repeated aggressive threats by forces trying to undermine their freedom.

For his part, Zonnour stressed that the Iranian-Syrian relations are deep-rooted and firm in the face of the threats leveled at the two countries, noting that the Iranian Parliament is a strong supporter of the Syrian resistance and would not spare any effort to help in the reconstruction process.

According to the report, the meeting was attended by Iranian ambassador to Damascus, Javad Torkabadi, and the Secretary of the People's Council Khalid Al-Aboud and Rami Al-Saleh.