Iran’s dignity, grandeur in intl. arena due to its perseverance

TEHRAN (defapress) – Tehran provisional Friday Prayers Leader Ayatollah Emami Kashani said that the dignity and grandeur of the Islamic Republic of Iran [after forty years since the glorious victory of the Islamic Revolution in 1979] is due to its perseverance against the global arrogance.
News ID: 79289 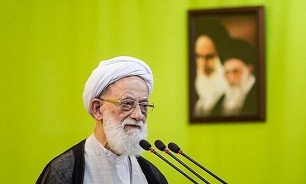 Prior to his sermon, he seized this opportunity to congratulate the birthday anniversary of Prophet of Islam Hazrat Muhammad (PBUH) and Imam Jafar Sadiq (AS) to all Muslims in the world.

Turning to the Islamic Unity Week, the Ayatollah said, “unity and amity of Muslims was also raised before the Islamic Revolution in a way that the grand Shiite and Sunni scholars emphasized on this issue”

He pointed to today’s remarks of the Leader of the Islamic Revolution Ayatollah Khamenei among participants in the 33rd International Islamic Unity Conference and added, “enemies penetrate into the decision-making centers and orchestrate their malicious objectives.”

Elsewhere in his remarks, Ayatollah Emami Kashani said that heads of the United States and the Zionist regime all have one principle which is being against human principles and ethics.

He further noted that enemy in Iraq, Afghanistan and other Muslim countries is sowing seeds of discord and disunity, because, they is against Islam which contradicts their interests.

Perseverance is the sole secret to victory and triumph, he said, adding, “people of Muslim countries should practice perseverance and must be vigilant against conspiracies waged by enemies on these countries.”