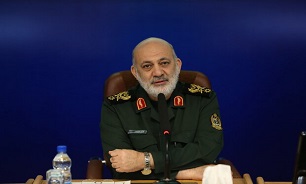 Speaking to reporters on Saturday, also referred to Iran’s achievements in building laser cannons for the air defense. “We have obtained the technology of laser air defense systems to destroy drones and quadcopters.”

“The research and experimental phase for this weapon has finished and it is now in the production line,” he highlighted.

Elsewhere he went on to say that “concerning ground cruise missiles, efforts are underway to enhance the range and precision of them using new digital mapping systems and with God’s grace, the experimental stage of this project will soon be finished.”

Pointing to surface-to-surface ballistic missiles, the commander said “our main effort in this area is to equip the missiles with pinpoint accuracy systems and the work is almost finished.”

“We use the state-of-the-art technologies in all these projects and we are among the top five countries in the missiles section,” he added.

Iran’s defense sector has seen many great achievements made by Iranian engineers during recent years. Tehran has repeatedly announced that its military power is just aimed at defending the country against threats and does not present any threat to others.