TEHRAN (defapress) – Iran’s ambassador to international organizations in Vienna described the country’s recent steps to reduce its commitments under the 2015 nuclear deal as “consistent” with the accord and said Tehran is still acting within its framework.
News ID: 79313 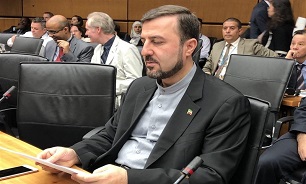 “Iran tries to protect its national interest in accordance with international rules, regulations and negotiated agreements, and even the recent steps taken by Iran to cease the implementation of some of its commitments under the JCPOA not only are the continuation of its full compliance with the provisions of the deal consistent with its paragraph 36, but also do not break any of its international obligations, and Iran still is acting within the nuclear deal,” Kazem Gharibabadi said in Vienna on Thursday.

He made the remarks during a meeting of the IAEA Board of Governors on “Verification and Monitoring in the Islamic Republic of Iran in Light of United Nations Security Council resolution 2231 (2015)”.

Following is the full text of his statement:

In the Name of Allah, the Compassionate, the Merciful

Thank you, Madam Chair, for your able leadership in conduct of the meetings of the Board. Since this is the last regular session of the Board with the presence of the Acting Director General Mr. Feruta, allow me to also thank him for his professional work during his tenure, and wish him all the best in his future endeavors. I would also like to extend my delegation’s congratulations to Ambassador Rafael Grossi on his appointment by the Board of Governors as the new Director General of the International Atomic Energy Agency and express my belief that under Ambassador Grossi’s leadership, the work of the Agency would be further enhanced.

Iran has shown its good will by implementing all its commitments under the deal wholeheartedly, and as the world witnessed, the Agency has continuously reported the full compliance of Iran with the JCPOA. The Islamic Republic of Iran has entered into this deal in a win- win approach for all participants. However, if it is to be the only, and I stress, the only participant who bears the burden and implements the deal unilaterally, such a lopsided implementation, naturally, would not last long, and gradual cessation of implementation of commitments would be the first step for Iran to take to bring back the lost balance in the deal.

With the US unilateral unlawful withdrawal from the deal and imposition of the inhuman sanctions against Iran, as well as the inability of the European partners in maintaining the inherent balance in the deal, it is difficult to talk about maintaining or building confidence. In this new situation, it was obvious that the whole Annex II and part of Annex III of the deal become void of their values. All these malign behaviors resulted in completely preventing Iran to benefit from what it was righteously entitled to  expect  under  the  JCPOA,  and  which  was  the  essential  basis  of  the consent of Iran to be bound by the JCPOA. However, the Islamic Republic of Iran hopes that the rest of the participants of the JCPOA as well as the international community would bring this derailed train back into its proper course of action, as it was in the first two years since the implementation day, when the other participants were somehow implementing the provisions of the deal; so that, we all would come back to the confidence building track and the world could witness confidence to multilateral frameworks.

For  Iran,  the  remaining  participants  of  the  JCPOA,  especially  the EU/E3, should take practical measures towards confidence building and try to  restore  the  level  of  confidence  which  already  existed  before.  Iran’s measure in the past four years after the implementation day is a vivid testament of its determination to build constructive relations with the European partners and its willingness for finding a rational and diplomatic resolution of the issues; however, unfortunately, they have not taken any credible practical step to garner confidence and bring back the lost balance of the deal. Iran tries to protect its national interest in accordance with international rules, regulations and negotiated agreements, and even the recent steps taken by Iran to cease the implementation of some of its commitments under the JCPOA not only are the continuation of its full compliance with the provisions of the deal consistent with its paragraph 36, but also do not break any of its international obligations, and Iran still is acting within the nuclear deal.

Unfortunately, instead of sincere practical measures, the Europeans on one hand sufficed to general statements on their obligations, and on the other, in their reference to the cessation of implementation of parts of Iran’s commitment, they often forget to even touch on the distrustful role of the US as a root- cause of this situation by disavowing itself from the deal, or their own inactions! It is quite obvious that adopting such an approach and ignoring the facts on the ground indicates that they are not ready to pay the necessary price for the sake of maintaining the most significant achievement of diplomacy and the cornerstone of on- proliferation architecture, as they say.

Against this background, Iran’s behavior should not be questioned in this regard,  because after the US withdrawal  from the deal  and the re- imposition of lifted sanctions, Iran has shown a “strategic patience” for a year, and in the meantime, tried to allow the other participants to find possible remedies for the US withdrawal. During this period of time, the E3/EU were asking Iran to remain in the deal and they instead would try to find alternative plans in guaranteeing the benefits for Iran as envisaged in the deal. On this account, Iran waited for a whole year, but unfortunately, no practical result was achieved in that regard. Therefore, in the long run, on 8th of May 2019, Iran has decided to resort to the provisions of the JCPOA,   taking   transparent   and   gradual   remedial   steps   to   cease performing  its  commitments  under  this  JCPOA  in  a  step- by- step, target- oriented, and reversible manner.

The steps taken by Iran in this regard were neither retaliatory measures, nor what some called “less for less approach”, but it is exactly in accordance with the mechanism foreseen in paragraph 36 of the deal. During this period, there was an interval of 60 days between each step, so that enough chance would be given to diplomacy. The other main reason for adopting such a gradual and step- by- step approach by Iran, was its sincere willingness to keep the deal intact and prevent it from failure. But since no solution was found and at the same time the US increased its unlawful sanctions regime, there was no other choice for Iran but to continue to exercise its rights under the deal. However, Iran has shown its goodwill at all times and expected that such an approach receives also goodwill and some practical measures on their part.

Nevertheless, it is most noteworthy that, Iran is still acting within the framework of the deal and is ready to revert to its full implementation provided that its legitimate rights, as envisaged in the deal is guaranteed and met.

Various reactions were shown by different countries vis- � - vis Iran’s recent gradual steps. If the JCPOA is to survive, the only way is for all to implement their commitments as envisaged in the deal and its Annexes. While it is evident that the other participants of the JCOPA are unable to do their parts in the deal, it would be irresponsible to expect that Iran does not use the remedial tools envisaged in the deal itself!

Since there were references to unfounded and irrelevant allegations by a few delegations, I would like to raise a few points of clarification, as follows:

I would like to reiterate that with the abysmal record of such a regime in non- accession to and non- compliance with all international norms and standards  in  the  area  of  non- proliferation  and  disarmament,   its representative is in no position to preach others on something they do not respect themselves.

It is well- known that the Israeli regime was the main adversary of JCPOA since the beginning and spared no effort in destroying it. We believe that the pressures exerted by this regime so far on other countries in this regard was not effective and that is the reason it has diverted its focus on the Agency since some time ago. Fabrication of documents and providing diversionary information to the Agency and Member States by this regime is not a new phenomenon. It is regretful that this regime, who is developing different types of WMDs, is doing all it can to mislead the public and the international community from the real threat to the regional and international peace, security and stability, and  turn  Iran’s  peaceful  nuclear  program  as  a  fabricated  and  unreal threat.

I Thank You Madam Chairperson