TEHRAN (defapress) – Forces loyal to Libyan strongman Khalifa Haftar said they shot down an Italian drone in western Libya, flying in a zone under their control.
News ID: 79327 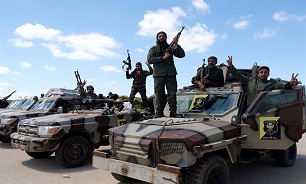 "We shot down the Italian drone with an anti-aircraft missile, north of Tarhouna," the rear base of Haftar's forces, southeast of Tripoli, said Haftar's spokesman Ahmad al-Mesmari.

"We are still waiting for an explanation about the reasons why the drone flew over Libyan territory," Mesmari added, AFP reported.

Italy's ministry of defense said earlier that the drone "crashed on Libyan territory while carrying out a mission" to ensure the safety of oil platforms and fishermen off Libya.

"An investigation is under way to determine the causes of the incident," Rome said in a brief statement, adding that "the flight plan was previously communicated to the Libyan authorities".

The pro-Haftar forces initially announced that they had shot down a Turkish drone.

It comes days after the UN's Libya envoy pleaded with foreign actors to honor an arms embargo.

Ghassan Salame said "external parties" were operating drone strikes that are increasing civilian casualties, adding that the growing use of experienced mercenaries was intensifying the conflict.

Libya has been mired in chaos since a NATO-backed uprising that toppled and killed dictator Muammar al-Gaddafi in 2011.

The UN-recognized Government of National Accord is contested by a parallel administration in the east, backed by Haftar.

Haftar launched an offensive on April 4 with his self-proclaimed Libyan National Army to take the capital, but the conflict's frontlines have moved little.

Faced with a standoff, the two sides have turned to sophisticated weaponry in the hope of gaining an advantage in a battle that has killed over 1,000, injured close to 6,000 and forced 120,000 people from their homes, according to UN figures.

Haftar is backed by Saudi Arabia, Egypt and the UAE, while Turkey and Qatar back his rival.