TEHRAN (defapress) – An Iranian knowledge-based company has used nanotechnology to develop a special coating that prevents the growth of marine organisms, such as moss, on the outer layer of the hull of ships.
News ID: 79344 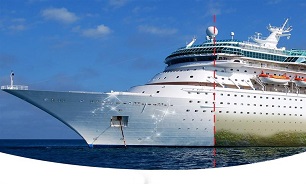 The anti-fouling material invented by the Iranian company prevents undesirable accumulation of moss on the wetted surface of vessels’ hull.

The coating is also environment-friendly, does not release any chemical material into the sea, and reduces the use of biocides.

In addition to the hull of ships, the nano-coating could be applied to coastal structures and piers, as well as military submarines.

The Iranian knowledge-based company has tested the new coating for five years before starting its mass-production.

The anti-fouling layer lasts for at least five years and functions like shark and dolphin skin.

The problem of adhesion of moss to the vessel’s hull increases frictional resistance and fuel consumption, and decreases the vessel’s speed.

In October, Leader of the Islamic Revolution Ayatollah Seyed Ali Khamenei assured Iranian knowledge-based companies and the enterprises working on advanced technologies that he would do the best to remove obstacles in the way of the youths' scientific progress.

Back in March and after opening a specialized pharmaceutical plant in Tehran, Iranian President Hassan Rouhani assured the private sector of his administration’s support for knowledge-based projects and research activities contributing to national production.

“The administration will seriously support the whole private sectors in the field of production, particularly those doing knowledge-based activities and the activities on the basis of knowledge and research,” Rouhani said on March 21.