TEHRAN (defapress) – Shocking images of a malnourished baby boy at a hospital in Yemen’s Sana’a reveal the devastating cost of the five-year Saudi aggression against the impoverished Arab country.
News ID: 79366 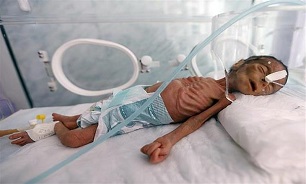 The pictures show the infant in an incubator at Al-Sabeen hospital in the Yemeni capital Sana’a, the Daily Mail reported.

The Saudi war has killed tens of thousands of people, most of them civilians, and driven millions more to the brink of famine.

The war has been described by the United Nations as the world's worst humanitarian crisis.