Iranian People Not to Succumb to Enemies' Plots

TEHRAN (defapress)- Iranian President Hassan Rouhani underlined that the enemies have hatched plots to make the people in Iran to bow to their pressures but to no avail.
News ID: 79404 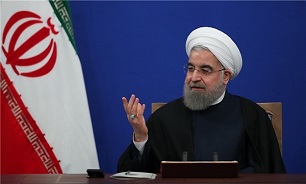 President Rouhani referred to the enemies' conspiracies against the Iranians, stressing that Iranian people will continue their way and will not bow to pressures.

Speaking to reporters at the end of his tour to East Azarbaijan Province, he said that people of Azarbaijan have never let enemies win and have preserved their independence and dignity.

He added that the trip was aimed at visiting quake-stricken areas and facilitating rendering services to people.

He noted that the Iranian government is determined to change Urmia Lake to tourism and treatment hub, adding that reviving the lake will be followed up seriously.

In relevant remarks earlier this month, the president said the country was currently at a very critical juncture, adding, “The people of Iran are united against the enemies’ pressures, and despite what the United States and the Iranian nation’s enemies are doing, this nation is readier than any other time for defending its country.”