TEHRAN (defapress)- Iranian Ambassador to the UN Majid Takht-e Ravanchi underlined that the government and all Afghan groups should be present in any peace talks.
News ID: 79405 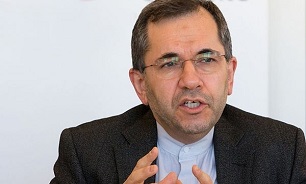 Takht-e Ravanchi made the remarks in New York on Wednesday, addressing a meeting of the United Nations General Assembly on Afghanistan.

He added that after years of insecurity and instability, Afghan people favor true and sustainable peace.

Any peace talks should involve all Afghan parties with the government at the center, Takht-e Ravanchi reiterated.

No country has the right to decide for Afghanistan's future, Iran's envoy said, noting that any peace process should be based on real ideals and needs of Afghan people and preserving the country's achievements, including the Constitution.

His comments came after Iranian Foreign Minister Mohammad Javad Zarif announced that his country was prepared to hold meetings with representatives of any Afghan groups to help to the establishment of peace in the country.

"We will meet all Afghan groups in line with efforts to establish peace in Afghanistan," Zarif told reporters on the sidelines of a cabinet meeting in Tehran on Wednesday.

He also confirmed that representatives of the Taliban group have traveled to Iran to this end.

The meeting took place on Tuesday in Tehran between Zarif and the delegation led by Mullah Abdul Ghani Baradar, the head of Taliban’s Qatar-based political bureau.

During the talks, the top Iranian diplomat highlighted the need for the launch of Afghan-Afghan talks and the formation of an all-inclusive government.

He said Tehran was ready to take part in efforts aimed at facilitating such a peace process that would be participated by Kabul and all influential Afghan political forces.

Iran, he added, was also prepared to expand its economic and cultural cooperation with the Afghan government and people on the basis of common interests.

Zarif’s meeting with the Taliban delegates was, according to the reports, meant to encourage different Afghan sides to sit at the negotiating table and promote dialog as part of efforts aimed at finding a solution to Afghanistan’s woes.

The meeting also conveyed Iran’s support for any effort by various Afghan forces to find common ground for cooperation towards paving the way for the departure of all foreign forces from Afghanistan and addressing the country’s security issues following such a potential withdrawal.

It was the latest in a series of meetings of a similar nature between Iranian Foreign Ministry representatives and Afghan officials and important figures, including President Ashraf Ghani.

Tehran has laid emphasis on the need for all Afghan groupings to join negotiations, spearheaded by the government, towards resolving the country’s problems.