Iraq Apologizes to Iran for Attack on Najaf Consulate

TEHRAN (defapress) – The Foreign Minister of Iraq made an apology to Iran for a recent mob attack on the Iranian consulate in the holy city of Najaf.
News ID: 79414 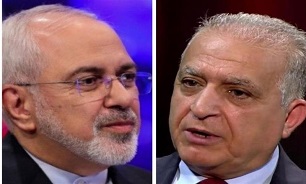 In a Thursday telephone conversation with Foreign Minister of the Islamic Republic of Iran Mohammad Javad Zarif, Iraqi Foreign Minister Mohamed Ali Alhakim offered his apologies for a Wednesday attack on the Iranian consulate in Najaf.

Alhakim also reaffirmed his government’s commitment to protecting the diplomatic missions and the Iranian diplomats in Iraq.

Anti-government protesters stormed and set the Iranian consulate ablaze in Iraq’s southern city of Najaf on Wednesday, drawing condemnation from Iraq's government, as the political turmoil continues to escalate.