TEHRAN (defapress)- President Donald Trump stated that the United States is “substantially” reducing its presence in Afghanistan, and claimed that a peace deal with the Taliban is close at hand.
News ID: 79425 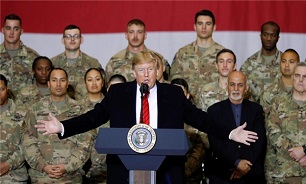 Speaking while on an unannounced Thanksgiving and his first visit to US troops in the country, where they have been fighting for 18 years, Trump said that his long-promised withdrawal from the country is underway, according to RT.

The American president did not provide any specific numbers, or a timeframe for the drawdown.

The withdrawal has, however, been underway for some time, according to the Pentagon. In October, Gen. Scott Miller, head of US and NATO forces in Afghanistan, told reporters that 2,000 of the roughly 14,000 troops there had already been pulled out. In August, Trump noted that he wished to reduce troop numbers in the country to 8,600, with those remaining to focus on counterterrorism operations.

The US’ “mission is not yet complete”, he added, noting that Afghan forces are “going to have to be able to sustain their own internal security” before the US would uproot itself entirely.

Afghanistan’s security depends largely on the outcome of peace talks between its US-backed government and the Taliban, which controls more territory now than at any point since the US invasion in 2001.

Speaking to troops at Bagram Airfield on Thursday, Trump stated that the militants “want to make a deal” with the US and Afghan governments.

Talks between the US and the Taliban collapsed in September, when Trump called off a planned meeting with the militants on US soil.

Although Taliban leaders released a pair of American and Australian hostages earlier this month, the group’s official line remains that it will not engage with the “illegitimate” US-backed government in Kabul.