TEHRAN (defapress) – A "loud bang" heard throughout north London and surrounding areas was a sonic boom from fighter jets which were scrambled after an aircraft lost contact in UK airspace.
News ID: 79444 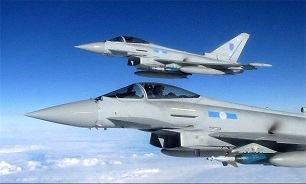 Hundreds of people reported being woken up by the noise at about 4.20am on Sunday morning, with some saying their homes "shook".

An RAF spokesperson said: "Two Typhoon fighter aircraft from RAF Coning by were scrambled at 0409 this morning as part of the UK's Quick Reaction Alert procedures after an aircraft lost communications in UK airspace.

"The aircraft was intercepted and its communications were subsequently re-established."

They added the Typhoons returned to their base afterwards.