NATO’s Outdated Stereotypes of Thinking Cannot Be Instrument for Cooperation

TEHRAN (defapress)- NATO’s obsolete stereotypes of thinking cannot be an instrument for cooperation in the rapidly changing world, Russian President Vladimir Putin told a session on the government defense order for the Russian Navy on Tuesday.
News ID: 79477 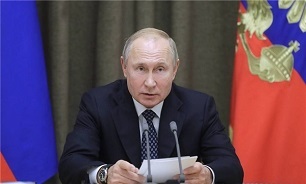 "Bloc stereotypes of thinking of the past years cannot be a good instrument for looking for and taking efficient decisions given the sweeping changes to the modern world," the Russian leader stressed, TASS reported.

"However, we have repeatedly expressed readiness for cooperation with NATO, showed readiness to jointly counter real threats, including, as we know, international terrorism, local armed conflicts and the danger of an uncontrolled proliferation of weapons of mass destruction," Putin added.

Putin highlighted that Russia had repeatedly met NATO halfway, trying to suggest a constructive agenda, and even holding joint events.

"However, after 2008, our cooperation was practically scaled down, since the Alliance was acting improperly towards Russia, if not to say rudely, without any regard to the interests of the Russian Federation," Putin said, noting that he was referring to partnership cooperation suggested by Russia.

The president informed that he was bringing the attention of the session to NATO-related issues, with a glance to an anniversary NATO summit taking place in London on December 3-4.

He reiterated that NATO was established on April 4, 1949, as the main component of the then unfolding Cold War, and to counter the Soviet Union.

"Now, as we know, the Soviet Union does not exist any longer. Neither does the Warsaw Treaty Organization, a military pact created in response to the establishment of NATO. Meanwhile, NATO not only exists, but is developing," the Russian leader stressed.

He also noted that NATO initially brought together 12 states, while now their number has grown to 29.

Putin also stated that the aggregate expenditures of the NATO member countries account for more than 70% of global military spending. However, the Russian leader expressed hope that "the interests of common security and a stable and peaceful future of the globe will prevail".

"Today we must proceed from the fact that the expansion of NATO and the development of its military infrastructure close to the Russian borders is one of potential threats to the security of our country," Putin emphasized.