TEHRAN (defapress) – Deputy coordinator of the Islamic Republic of Iran’s Army said the Navy’s is currently at the highest state of readiness thanks to the untiring efforts of domestic experts.
News ID: 79539 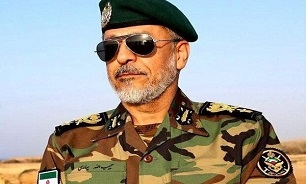 “The exemplary trust and reliance to the young Iranian experts has helped us reach a great state of power in the marine sector,” Rear Admiral Habibollah Sayyari said during a visit to the Marine Industries headquarters of Fars province on Tuesday.

The commander referred to the significant achievements of the Iranian Navy in the past years, including the design and manufacture of different aerial devices and marine vessels, saying, “Such developments have been made under the harshest sanctions; so, we believe that we can reach whatever we seek.”

Iran has made major breakthroughs in the defense sector in the past years.

The Navy unveiled a new homegrown unmanned aerial vehicle, dubbed Simorgh, last week. With a range of 1,500 kilometers and a service ceiling of 25,000 feet, the combat drone can be used for combat, reconnaissance, and tactical operations, and electronic warfare.

On November 30, Iran’s Navy also announced the mass production of the indigenously-designed and submarine-launched “Jask” cruise missile along with unveiling a handful of other military projects and technological achievements.