TEHRAN (defapress)- Spokesman and Head of the Islamic Revolution Guards Corps' Public Relations Department Brigadier General Ramezan Sharif dismissed media misquotes of the recent remarks made by a veteran Iranian General about Iran's response to Tel Aviv's threats from Lebanon, saying that he is not an advisor to the IRGC commander.
News ID: 79550 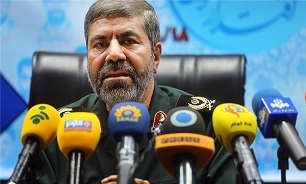 "Reviews show what General Morteza Qorbani's remarks have been misinterpreted and misquoted by the media," General Sharif said on Wednesday.

The spokesman said "General Qorbani has, in fact, meant to speak of response to Israel by possible various means and capacities".

The spoksman valued the services rendered to the country by the war veteran, but underlined that General Qorbani "is not an advisor to the IRGC commander at present", and works elsewhere at the Iranian Armed Forces.

General Sharif also lauded the Lebanese defense minister for his smart response which foiled the Saudi-Zionist media's mischief over the remarks.

The Persian-language Mizan Online News Agency had quoted General Qorbani in an interview on Tuesday as saying that the smallest provocation from Israel would lead to flattening Tel Aviv from Lebanon, without even having to launch missiles from Iran.

The Israeli and Arab media outlets were fast to run a hype over his misinterpreted comments.

In response to the statement, Lebanon’s Defense Minister Elias Bou Saab said, “If what is attributed to (General Qorbani) is correct, it is unacceptable and it is a violation of the sovereignty of Lebanon, which has a relationship of friendship with Iran.”

“The independence of the Lebanese must not be affected in any way,” the minister stressed.