TEHRAN (defapress)- Massoud Soleimani, a renowned Iranian scientist who had illegally been kept behind bars by FBI for 13 months before he was released as a result of a prisoners swap between Iran and the US in early December, says enemies, including the US, are afraid of Iran's further progress in scientific and technological fields.
News ID: 79576 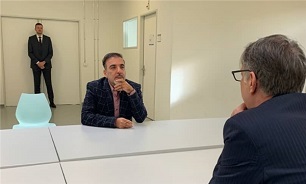 "What makes enemies sad and afraid is Iran's science and they cannot bear Iran's progress," Soleimani said, addressing a ceremony to welcome him at Tarbiat Modares University on Sunday, before he was rushed to a hospital in Tehran for a heart attack.

He said nothing is more important to Iran than standing on its feet and relying on its internal power with the help of science.

Asked about the cause of his detention in the US without a trial, Soleimai said the hegemonic nature of the Americans prevented them from trying him while they were aware that there was no proof or evidence against him.

Medical authorities at the THC said in a phone contact that Soleimani is in good health conditions now and receiving necessary treatment.

Professor Soleimani arrived at Tehran Mehrabad airport on December 7 after he was released by the US in a prisoner swap. He was welcomed by his family members and Iranian officials upon his arrival.

The Iranian foreign minister said in a tweet earlier in the day that the top scholar, along with Xiyue Wang — a Chinese-born US citizen who had been sentenced to 10 years in prison for espionage in Iran in 2017 — had been delivered to the Swiss officials and would “be joining their families shortly”.

Soleimani arrived in the US on October, 22, 2018 with a visa issued upon an invitation by the Mayo Clinic in Minnesota to lead a research program on the treatment of stroke patients.

He was, however, arrested by the FBI upon arrival at the Chicago airport. His visa was canceled and he was transferred to a jail in Atlanta, Georgia.

His family had several times voiced worries about Soleimani’s “poor” mental and physical condition in jail, saying he is suffering from chronic irritable bowel syndrome, has lost 15 kilograms and suffers from severe vision loss.

BJay Pak, the US attorney in Atlanta, secured Soleimani’s indictment on June 12, 2018, just a month after President Donald Trump withdrew the US from the Iran nuclear deal, and Soleimani had been fully unaware of such an indictment when he flew to the US.

Franco and Page Pate, another Atlanta lawyer, said that they had been puzzled by the federal government’s decision to prosecute a renowned Iranian professor and two of his former students - Mahboobe Ghaedi and Maryam Jazayeri - for purported trade sanction violations over eight vials of human growth hormone.

Franco said that Soleimani’s treatment by federal authorities, the revocation of his visa and the decision to detain him without bond doesn’t square with Soleimani’s international reputation as a scholar, professor, and doctor widely known in the field of stem cell research and regenerative medicine. Soleimani has no criminal history anywhere in the world, he added.

The hormone, which is a form of synthetic protein, was seized from Jazayeri in 2016 by customs authorities in Atlanta when she was heading to Iran to give it to professor Soleimani for research purposes. Jazayeri had received the hormone from Ghaedi.

The seizure occurred at a time when Washington was still a signatory to the 2015 nuclear deal, officially known as the Joint Comprehensive Plan of Action (JCPOA), and anti-Iran sanctions had not been re-imposed yet.

The growth hormone is not banned in the US or Iran and was being used “exclusively for medical research”, which is still considered largely exempt from US sanctions, Franco said.

However, Ghaedi and Jazayeri faced similar federal charges for attempting to supply Soleimani with the growth hormone.

“I truly don’t understand it,” Franco said of the government’s decision to prosecute, adding that it appeared to be “some type of policy argument”. Pate, who represents Jazayeri, said his client was “completely confused by all this.”

Motions to dismiss the charges are pending in federal court in Atlanta in front of US District Judge Eleanor Ross. However, Federal prosecutors in Atlanta have not yet responded to the motions.

Hearing this case had been adjourned for at least three times since October and his family and Tarbiat Modares University had paid over $70,000 to his lawyers to prove his innocence, but all to no avail, said TMU’s Vice-chancellor for Research Affairs Yaghoub Fathollahi.

Fathollahi added that Soleimani is a distinguished professor who has been ranked among the top 1% scientists in the world.