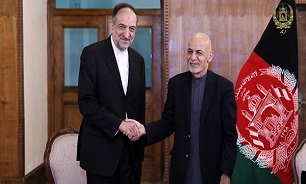 In this meeting, the Afghan President underlined the need of expanding ties with Iran.

The Iranian Ambassador, for his turn, also underscored the significance of improving ties between the two countries as well as continuing peace negotiations led by the Afghan government.

As reported, Afghan deputy foreign minister Edris Zaman also attended the meeting, where ambassadors from Belgium, Bosnia and Herzegovina, and Portugal were present, too.