TEHRAN (defapress) – The Spokesperson of the Iranian foreign ministry Abbas Mousavi said on Monday that Iran is mulling over President Rouhani’s visit to Tokyo and the final decision will be announced in near future.
News ID: 79588 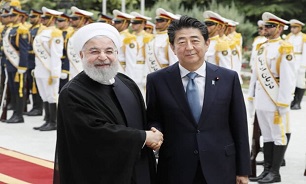 Mousavi’s remarks came while Japanese media, including the Japan Times, have announced that Japan and Iran are making final arrangements for their leaders to hold talks on December 20.

According to them, President Rouhani is planning to arrive in Japan on the evening of December 19 for a three-day visit after stopping in Malaysia, where he is expected to attend a conference.

Mousavi, on Monday, confirmed that Rouhani will make a trip to Malaysia.

In his earlier remarks on December 14, Mousavi said “Japan has proposed some suggestions to reduce the tensions and we hope President Rouhani’s visit to Japan would be a fruitful and improving one.”

He referred to the warm ties between the two countries and that Japan stood among fixed customers of Iranian oil which was obliged to withdraw from purchasing due to US sanctions.