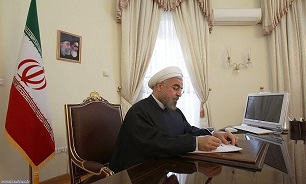 In a letter to Emir of Qatar on Wednesday, Rouhani offered him and the people of the country congratulations on the National Day of Qatar and expressed hope that Tehran-Doha relations would further deepen in all fields of mutual interest.

“I hope the commonalities of the two countries will provide the grounds for further expansion of ties and cooperation between the two nations,” he said.

He further wished Qatari Emir health and success and the people of Qatar prosperity and felicity.

On 18 December 1878, Jassim bin Mohammed Al Thani unified all the local tribes by combating external forces, such as the United Kingdom. The holiday was established by a 21 June 2007 decree Sheikh Tamim bin Hamad Al Thani.