TEHRAN (defapress) – Iran's Ambassador to the United Nations Majid Takht-Ravanchi has censured the US sanctions against different sectors of the Iranian economy, including oil and banking sectors, arguing that the measures are negatively affecting the daily lives of millions of ordinary people.
News ID: 79628 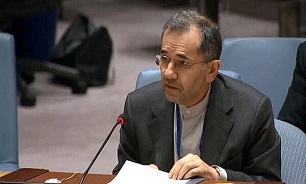 Speaking at a United Nations General Assembly meeting in New York on Fri. on nuclear non-proliferation and implementation of Resolution 2231, which backed the 2015 Iran nuclear deal – officially known as the Joint Comprehensive Plan of Action, Majid Takht-Ravanchi stated that the US sanctions "are neither short of war nor better than or an alternative to war," and that they are actually tantamount to war "but by other means and names."

He said that Iran will not be indifferent to the continuous unlawful sanctions and lack of complementary moves of the JCPOA members, adding the country will take necessary actions through unlimited options.

The full text of Takht-Ravanchi's address to the UN General Assembly meeting reads as follows:

The Security Council is once again considering the implementation of one of its most important resolutions, namely resolution 2231, which is being vehemently violated by a permanent member of the Council, an unprecedented development in the history of the UN. Here, I wish to express my appreciation to all fourteen members of the Council for lending their valuable support to the JCPOA.

When the Council, through unanimous adoption of resolution 2231 endorsed the JCPOA, the whole world acclaimed that as a significant achievement of dialogue and multilateral diplomacy and acknowledged its indispensable contribution to international peace and security. The resolution emphasizes that “the JCPOA is conducive to promoting and facilitating the development of normal economic and trade contacts and cooperation with Iran”. As the Secretary-General has rightly noted in his recent report “an essential part of the JCPOA is the lifting of nuclear-related sanctions on the Islamic Republic of Iran allowing for the normalization of trade and economic relations”. Furthermore, based on JCPOA, E3/EU+3 committed “to ensure Iran’s access in areas of trade, technology, finance and energy”, and US committed “to prevent interference with the realization of the full benefit by Iran of the sanctions lifting”.

On 8 May 2018, the US president issued a Presidential Memoranda, “ceasing US participation in the JCPOA”. In fact, the US decided to illegally withdraw from the JCPOA and in contravention of its international obligations returned back all of its sanctions that had been lifted in accordance with the JCPOA. This and subsequent developments rendered the JCPOA with respect to Iran’s benefits almost fully ineffective and in certain aspects, the situation now is even worse than what we had before the JCPOA concluded. Since then, the application of the US unlawful sanctions has been extended into other states and in essence, the US is punishing them for honoring their international commitments in accordance with resolution 2231, another unmatched development in the UN history.

What the US sanctions are intended to do is “collective punishment” of the general public, which is prohibited even in armed conflicts. They are also targeting the most vulnerable groups of ordinary people in order to create discontent within the society and as such are inhumane in nature.

The US sanctions are also targeting different sectors of the Iranian economy including oil and banking sectors, which are negatively affecting the daily lives of millions of Iranians. Contrary to the claims of the US, its sanctions are neither short of war or better than or an alternative to war; they ARE actual war but by another means and names. Pure and simple! The US, through weaponizing food and medicine and in total disregard of 3 October 2018 ruling of the ICJ, has extended its sanctions even to other humanitarian goods.

US officials have confirmed that the pain of sanctions for ordinary people is intentional and part of a political strategy. US Secretary of State has gone on record at least twice with his conditions to allow food and medicine flow to the Iranian people.

By any measure, the US sanctions are illegitimate, immoral, inhumane and cruel. It is a shame that the US bullying has resulted in discontinuation of the export of certain medicines to Iran, causing a nightmare for some patients.

For instance, a European company, under the pressure of US sanctions, has stopped exporting special bandages for patients suffering from EB, a rare genetic condition resulting in easy blistering of the skin.

A 2-year-old girl from the city of Ahvaz, Ava, an EB patient, is one of “butterfly children” who are known so because their skin is as fragile as butterflies. To avoid infection, butterflies should be covered by special bandages. Even those bandages do not lift the pain. However, the alternative is horrible as it peels kids’ soft skin at the time of removal. Nowadays, the importation of these special bandages for EBs has become almost impossible, endangering the lives of innocent children like Ava. Now butterflies are feeling the pain of the US inhumane sanctions with their hearts and souls. In June this year, Ava was relieved of pain forever and passed away. Her story only reflects the tip of the iceberg, as children and adults with cancer and rare diseases are struggling in silence with death. Killing children and patients takes no courage!

US maximum pressure policy and sanctions are tantamount to economic terrorism which are killing innocent people. Therefore, those who have been involved in designing, advocating and executing these sanctions must be held accountable.

The Secretary-General is expected consistent with his mandate under paragraph 7 of Note. 44 to thoroughly report on the US sanctions and their inhumane impacts.

The United States has further illegally sanctioned nuclear measures authorized under resolution 2231, thus preventing the implementation of Iran’s and other States’ commitments. Furthermore, activities of the Procurement Channel have been negatively affected.

Despite all hardships inflicted upon the Iranian people as a result of the United States’ unlawful sanctions, Iran, at the request of other JCPOA participants and based on their assurances for compensation, waited for a year and continued to fully implement its commitments.

On 6th July and 24th September 2018, Iran was assured by JCPOA participants of compensation especially in establishing effective financial channels, export of oil, shipping and insurance, and the protection from the extraterritorial effects of US sanctions. None of these assurances has been materialized until today.

Iran has been and continues to be committed to the implementation of the JCPOA. This fact has been time and again confirmed by the IAEA including after the reintroduction of unilateral sanctions by the United States. However, unilateral implementation of the JCPOA is not sustainable. The deal needs more than one willing and able party to be fully implemented. After exercising strategic patience for a year and in the face of apparently continued inaction of the European participants in the JCPOA and after witnessing that the promises made to Iran were not honored, Iran was left with no other option than to act and take the necessary measures to cure the imbalance created in the JCPOA. In so doing, Iran that had already triggered and exhausted JCPOA dispute settlement mechanism eventually applied the remedy manifestly recognized by the JCPOA and the Security Council. This decision was carefully crafted to save the JCPOA.

Iran has ceased performing its commitments in part in accordance with paragraphs 26 and 36 of the JCPOA. To give room for diplomacy, a step by step approach with two months’ intervals has been designed.

Iran’s steps are reversible but the damages inflicted upon Iran and the Iranian people due to illegal sanctions are not reversible at all. How do the opportunities that are lost, the economy that is affected, and above all, the precious lives that are perished as well as the suffering of the Iranian people especially kids, elderly and patients can be reversed?

Iran has ceased implementing only some voluntary measures. They have not touched Iran’s cooperation with the IAEA.

They are not also inconsistent with our safeguards related obligations. The Agency has repeatedly confirmed that Iran is subject to the most robust verification system in existence anywhere in the world. It is noteworthy that in 2018 the number of all IAEA safeguard inspections around the world was 2195, while in 2019 until November, Iran was subject to more than 688 inspections amounting to 1376 person-day inspections.

Iran has always respected its commitments and responded to logic with logic and respect with respect. However, we cannot and will not accept bullying from any quarter. Our response to threats and intimidation is in kind. At the moment, best efforts in good faith are being made by Iran to sustain the JCPOA. As soon as the full implementation of the JCPOA by other participants are guaranteed, Iran will immediately reverse all of its measures. If there is a will for JCPOA’s full implementation by all concerned, there is a way. However, Iran cannot remain indifferent to the continuation of illegal sanctions and the lack of compensatory response to these sanctions by other participants. Iran will take necessary measures to secure its national interests and our options are not limited. At the same time, any unnecessary and unwarranted measures against Iran will be met with decisive action as has already been conveyed at the highest level to our JCPOA partners.

The US’s offer of unconditional talks with Iran is disingenuous emanating from its habit to enter a dialogue from a position of strength and not based on equal footing. The call for a dialogue with Iran while simultaneously insisting on the application of “maximum pressure policy” against the Iranian people are mutually exclusive. Iran does not negotiate under the threat of a sword. The US has to make a strategic decision. As an American proverb says, “you can’t have your cake and eat it too”. Either you continue with your horrible and outdated maximum pressure policy, while scolded by the Iranian people and branded at the international level as an untrustworthy partner, OR you act as a normal country and undo the sanctions. In this context, the implementation of Security Council resolution 2231 by the US will pave the way for a genuine dialogue to start within the framework of the nuclear deal.

Since the conclusion of the JCPOA, a few countries have attempted to expand the involvement of the Security Council to issues beyond Iran’s peaceful nuclear program. In the course of the nuclear negotiations, we resisted the temptation of some participants to include extraneous matters in the final document and hence did not agree either to touch Iran’s legitimate defensive capabilities or to affect its role in the region including in the fight against terrorism. Recent attempts to link these issues including through misinterpretation of Annex B of resolution 2231 are completely unjust.

Acquiring legitimate means of defense is an inherent right under international law. We are living in a volatile and insecure region. Furthermore, the sale of a large amount of heavy weaponry to our region has turned it into a powder- keg. Those who ask Iran to limit its legitimate conventional capabilities are making lots of money out of exports of deadly weaponry to this region. Under no circumstances, will Iran, compromise on its security.

Iran does not possess nuclear weapons and has committed to the JCPOA not to ever seek, develop or acquire them. Accordingly, Iran’s missiles are “not designed to be capable of delivering nuclear weapons”, and therefore, they are outside the purview of resolution 2231. The term “designed to be capable” was deliberately chosen pursuant to cumbersome negotiations in order to exclude Iran’s conventional missiles from the scrutiny of the resolution. This notion is well reflected in Iran’s statement following the adoption of resolution 2231.

Arbitrary reinterpretation of the resolution by recourse to a non-legally binding definitions of an informal and yet exclusive 35-member club-like MTCR is totally misleading and thus unacceptable.

In conclusion, our observations with regard to the Secretary-General’s report are contained in my recent letter to the Council, and covers our views on issues that have not been addressed in my remarks today.