TEHRAN (defapress) - US President Donald Trump has signed off on sanctions against companies building a Russian natural gas pipeline to Germany that Congress fears will give the Kremlin dangerous leverage over America's European allies.
News ID: 79638 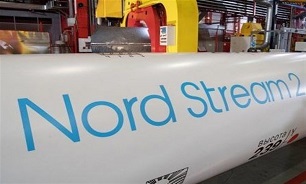 The sanctions, which are opposed by the European Union, were included in a sprawling defense spending bill that Mr. Trump signed at a ceremony on Joint Base Andrews, an air force installation outside Washington.

They target companies building the nearly $11 billion Nord Stream 2 pipeline under the Baltic Sea with the aim of doubling deliveries of Russian natural gas to Europe’s leading economy, Germany.

US lawmakers have warned that the pipeline would enrich a hostile Russian government and vastly increase President Putin’s influence in Europe at a time of heightened tension across the continent.

Both houses of Congress overwhelmingly approved the sanctions, with the Senate voting on Tuesday to send the measure to Mr. Trump’s desk.

Mr. Trump, who has been accused by Democratic opponents of being soft on Mr. Putin, had little choice but to give his approval. The sanctions were inserted into a much wider $738 billion annual Pentagon funding bill and, given the level of congressional support, a veto would likely have been overturned.

The US measures have angered Moscow and the European Union, which says it should be able to decide its own energy policies.

Heiko Maas, Germany’s foreign minister, discussed the issue during a phone call on Friday with Mike Pompeo, the US Secretary of State.

Mr. Pompeo expressed "strong opposition" to the project, a State Department spokeswoman said in a statement, The Telegraph reported.

The German-Russian Chamber of Commerce insisted last week that the pipeline was important for energy security and urged retaliatory sanctions against the US if the bill passes.

The US sanctions target pipe-laying vessels for Nord Stream 2 and TurkStream, a Russia-Turkey pipeline, and include asset freezes and revocation of US visas for the contractors.

One major contractor that could be hit is Swiss-based Allseas, which has been hired by Russia’s state-owned energy giant Gazprom to build the offshore section.

The power of Gazprom, which is closely integrated with the Russian state, is at the center of concerns about the pipeline in the United States, and also in eastern and central European countries.

Senator Ted Cruz, a Republican ally of Mr. Trump, said that halting Nord Stream 2 should be a major security priority for the US and Europe alike.

"It’s far better for Europe to be relying on energy from the United States than to be fueling Putin and Russia and dependent on Russia and subject to economic blackmail," he told the Senate last week.

However, Senator Rand Paul, another Republican, voted against the bill, objecting to its bid to "sanction Nato allies and potentially American energy companies."