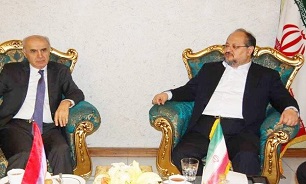 The two sides exchanged their views on signing and sealing a bilateral cooperation agreement in future and also developing economic ties in different levels.

Iranian Labor Minister Mohammad Shariatmadari stated, “the two countries of Iran and Armenia have established age-old and longstanding relations with each other which dates back to many years ago.”

A Memorandum of Understanding (MoU) was inked between the two countries in 2011 in the field of labor and social welfare, based on which, it was agreed to set up a joint cooperation committee, he said, adding, “the draft of this cooperation document has previously been submitted to Armenian side and it is hoped that this document will be inked in the course of upcoming visit of Armenian labor minister to the Islamic Republic of Iran.”

Exchanging experiences in the field of labor relations, issues pertinent to welfare and cooperating in the field of technical and vocational training services have been emphasized in this document, he emphasized.

Moreover, the Eurasian Economic Union (EAEU) can help develop economic cooperation between Iran and Armenia in the arena of economic activities as well, Shariatmadari added.

For his part, Armenian Ambassador to the Islamic Republic of Iran Artashes Toumanian said that the two countries of Iran and Armenia have established age-old ties with each other which dates back to many years ago.

Armenia’s relation with Iran is an integral part of its foreign policy, he said, adding, “in addition, Armenia is ready to expand economic exchanges with the Islamic Republic of Iran.”