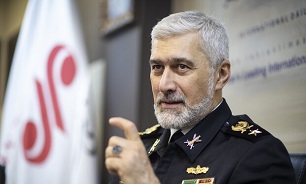 “Damavand and Dena destroyer will be equipped with surface-to-air missiles and surface-to-surface missiles, which boast higher speed, power and range than the earlier versions of missiles, and are easier in application and maintenance,” Rear Admiral Amir Rastegari told Mehr News Agency.

“We have achieved the technology to manufacture phased-array and optical radars, and we will install such systems on Dena and Damavand,” he added.

The top commander hailed significant achievements of the marine industries by the help of domestic experts, saying, the mentioned radars are now offered to several foreign buyers, a number of which are among the industrialized countries.

Rear Admiral Rastegari said the propulsion systems of the destroyers have also been up improved in a bid to bolster the Navy’s reaction pace in critical marine situations.

Highlighting the vital role the marine industries and the naval forces play in the defending the country, which is linked to the free waters, the military chief note that the Defense Ministry has geared up to become self-sufficient in this field by developing different strategic marine equipment, such as new propulsion systems, gasoline and diesel engines, power transmission systems, and monitoring systems.

He stressed that destroyers and giant submarines will become a big part of the Iranian Navy’s flotilla in the near future.

The country has made considerable progress in the field of marine vessels, especially in the design and manufacture of submarines and destroyers.