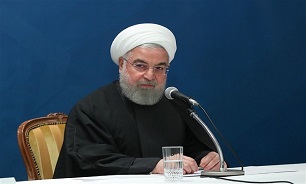 Speaking to reporters in Tehran on Saturday upon his arrival from a five-day trip to Malaysia and Japan, Rouhani described the security of energy and shipping as an important issue for all major Asian and European countries whose energy requirements are tied to this region.

“Japan supports Iran’s initiative that is the HOPE peace initiative… Japan has also announced that it will not take part in the Americans' plan for security in the region. We welcome both issues," the president added, Press TV reported.

"Japan wants to bring a surveillance vessel to the region but not to the Persian Gulf region and the Strait of Hormuz but to the Bab el-Mandeb Strait and the Sea of Oman," Rouhani noted.

Rouhani further stated that he held talks with Japanese Prime Minister Shinzo Abe about the US sanctions against Iran.

"Except for one or two countries in the world, all oppose sanctions and all also know that these (US) sanctions breach international regulations and will be of no avail," he added.

He then emphasized that the sanctions harm not only Iran but all other countries, adding, "In fact, it is a lose-lose decision that the US has taken wrongly and made a miscalculation."

The Iranian chief executive also said that Japan and the Europeans are trying to break the US sanctions on Iran and have come up with proposals in this regard and noted that Tehran and Tokyo would proceed with further consultations.