TEHRAN (defapress)- Bangladesh Ambassador in Tehran Gousal Azam Sarker underlined the need for developing economic and trade relations between his country and Iran, specially in area of carpet-weaving.
News ID: 79650 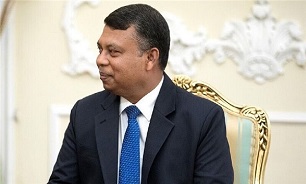 "Earlier there were good trade ties in the field of thread between the two countries, but it seems as a result of sanctions the ties have scaled down," the envoy said in a meeting with Head of Kashan Chamber of Commerce.

Sarker, meantime, expressed the hope that the relations between the two countries will improve in the near future.

The Bangladeshi envoy also welcomed investment of the Iranians in his country, and said that they can invest in the field of producing thread to help meet their needs for raw materials in manufacturing carpet factories in Kashan.

Describing private sector as driving force of Bangladesh, he said that renewable energies, information technology, pharmaceuticals and ship building are among the other areas of investment.

Head of Kashan Chamber of Commerce, Industries, Mines and Agriculture Mahmoud Tavallaei, for his part, said that capacities of both sides should be identified in a bid to promote exchanges.

He also called for two-way and win-win trade between the two countries in a bid to create a good perspective for bilateral relations.

In relevant remarks in late October, Sarker said that "Bangladesh is resolutely after broadening relations with Iran in diverse areas of cooperation, specially agriculture and tourism".

In a meeting with Deputy Governor General of Iran’s central province of Isfahan Heydar Qassemi held in the province’s capital city of Isfahan at venue of the governorate-general HQ today, Sarker said that Dhaka "is willing to develop cooperation with Tehran" in different fields.

The ambassador pointed to agricultural and tourism capacities of the two countries as the ground for expansion of bilateral relations.

He said that resumption of flights between Dhaka and Tehran would help tourism development.

Sarker further expressed his country's readiness to gain Iran's' useful experiences in the area of nanotechnology.

Referring to exchange of visits of the Iranian and Bangladeshi officials to either country, the ambassador said that such visits have facilitated development of cooperation.

For his part, the provincial official called for cultural, tourism and economic cooperation with Dhaka.