TEHRAN (defapress)- Iranian Government Spokesman Ali Rabiyee dismissed the threats posed by the European signatories of the nuclear deal, officially known as the Joint Comprehensive Plan of Action, saying that Westerners will fail to intimidate Tehran into giving up its current policy of active resistance.
News ID: 79654 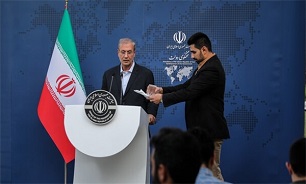 At his weekly presser on Monday in Tehran, Rabiyee referred to the recent threats by the European parties to the deal, saying, “The Islamic Republic will never leave its position by such threats.”

“Iran’s has always been trying to preserve the JCPOA and we continue our efforts in this path, the spokesman underlined.

He reiterated Tehran’s position regarding the implementation of the pact, stressing that the JCPOA is a multilateral agreement, which should be respected by all the parties to the deal.

In May 2018, US President Donald Trump unilaterally pulled his country out of the JCPOA signed between Iran and major world powers in 2015, in defiance of global criticism, and later re-imposed the sanctions that had been lifted against Tehran as part of the agreement.

European members since last month have begun raising the possibility of triggering the JCPOA’s “dispute resolution mechanism,” which is also known as the trigger mechanism, and whose activation can lead to the return of the UN sanctions on Iran.

Recent threats to activate the trigger mechanism envisaged in the JCPOA were brought up after the Iranian government took a series of steps in reducing its commitments under the deal in response to the US measures and the Europeans’ failure to keep their end of the bargain in protecting Iran’s economic benefits in the agreement.

Iran has so far rowed back on its nuclear commitments four times in compliance with Articles 26 and 36 of the JCPOA, but stressed that its retaliatory measures will be reversible as soon as the European signatories — France, Britain and Germany — find practical ways to shield mutual trade from the US sanctions.

Elsewhere in his remarks, Rabiyee touched upon Washington’s unilateral sanctions against his country, saying, “Iran has been sanctioned by bans it does not deserve; therefore, we will exert every effort to fend off the US sanctions by relying on domestic capabilities and diplomatic capacities.”

He noted that the Islamic Republic is carefully following the necessary steps to ward off the cruel sanctions, adding that “to do so, the government is trying to boost its active diplomacy and deepen the mutual understandings with people to improve the domestic economy.”

On Sunday, Iranian Parliament Speaker Ali Larijani said that the US sanctions have increased self-sufficiency in the country and many industries are flourishing.

Many producers say that their economic situation has improved since the sanctions were imposed because all people have turned back to purchase products manufactured inside Iran, Larijani said in Tehran.

"It is an important point that the Americans should pay attention; the Iranians enjoy the capability and talent to turn difficulties into opportunities," he added.

In relevant remarks last month, Iranian Deputy Minister of Science, Research and Technology Abdulreza Baqeri underlined that the US sanctions against his country should be seized as an opportunity to accelerate progress and development in Iran.