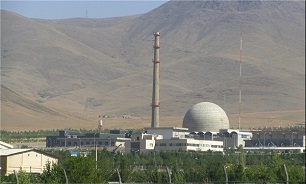 The first phase of installing equipment in the secondary circuit of Iran's Arak heavy water nuclear reactor became operational this morning in the presence of Salehi.

Redesigning the reactor by Iranian scientists at the highest standard levels is on the agenda. The reactor has two circuits. The first one obtains the heat from the core of the reactor and the second one transfers the heat to the cooling towers, and eventually to the environment.

The operation of this circuit will be done through the main control room of the reactor.

All the equipment was designed and made by the Iranian experts inside the country.

According to the Joint Comprehensive Plan of Action (JCPOA), the redesign of the reactor was to be done in a five-year period by Iran, China, and the US. After the US affronted the world and withdrew from the internationally-confirmed and UNSC-endorsed deal, the United Kingdom took its place. With the US' sabotage, the job took a bit longer to be done, which was criticized by Iran.

Earlier, Salehi had said that his country will operationalize the second phase of the Arak heavy water reactor construction within the next 3 weeks.

“We will make the secondary part of the Arak Heavy Water Reactor Facility operational as early as the next three weeks; the reactor consists of primary and secondary sections whereby an overwhelming part of [nuclear] processes are done in the latter,” Salehi told reporters after attending a parliamentary committee session in Tehran.

Elsewhere in his remarks, Iran's nuclear chief pointed to the latest condition of units 2 and 3 of the Bushehr Nuclear Power Plant, saying, “It’s been two years since [the construction of] Bushehr’s reactors 2 and 3 started, and according to plans, the second reactor will become functional in 2025 and the third in 2027.”

Underscoring technical measures adopted by Tehran to scale back its nuclear commitments under the landmark 2015 nuclear deal, officially known as the Joint Comprehensive Plan of Action (JCPOA), Salehi said, “the reduction of obligations would not constitute a violation of the JCPOA from a technical perspective and the possibility of returning to the pre-JCPOA conditions still exists.”

Before the deal was concluded, the AEOI head said, Iran enriched approximately 2,300 kilograms of enriched uranium [per year] and the current figure stands at 1,700-1,800 kilograms per year. "So we are returning to the conditions that existed before the JCPOA in terms of uranium enrichment capacity," he added.

“In the present situation, all [centrifuges] are modern-generation machines. Therefore, [the pace of] our research studies have not been slowed down or come to a halt,” Salehi added.

In October, Spokesman for the Atomic Energy Organization of Iran Behrouz Kamalvandi underlined that Tehran will keep on reducing its commitments under the JCPOA if the European parties do not comply with the JCPOA.

“Iran will continue its remedial steps concerning the commitments to the Joint Comprehensive Plan of Action if the parties to the JCPOA continue with their non-compliance,” Kamalvandi said in a meeting with Finnish Ambassador to Tehran Keijo Norvanto and Head of the EU Delegation to the UN/IAEA in Vienna Stephan Klement.

The AEOI spokesman said that the nuclear regulations, including the Disarmament should be binding for the member-states just like the Charter of the international community, adding that the nuclear rights must be respected for any states away from bias.