TEHRAN (defapress) – The manufacture of Iran’s homegrown fighter jet ‘Kosar’ is fast on track, according to the Commander of the Iranian Air Force Brigadier General Aziz Nasirzadeh.
News ID: 79678 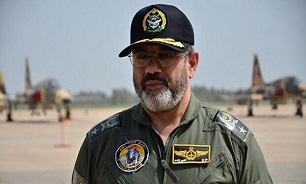 The production process of this newly-developed aircraft is being carried out in Tehran and Isfahan with a very satisfactory pace, the Commander of the Iranian Air Force Brigadier General Aziz Nasirzadeh said on Tuesday.

“We are hoping to stage an aerial parade with three of the fully-Iranian Kosar fighter jets on 17th April, concurrent with the Army Day,” he added.

The Iranian commander maintained that the Army Air Force in Tehran and the Defense Industries Organization in Isfahan are jointly in charge of managing the Kosar jets’ production line.

The newly-developed aircraft is a twin-engine military fighter, which is capable of carrying various weapons and is used for short aerial support missions.

Kosar is equipped with the fourth generation of avionics systems, and it can carry various kinds of missiles and bombs that are designed and manufactured domestically and there will be no need for any foreign help.

Kosar was as unveiled in July 2017 and made its first training airshow flight over the skies of the Capital Tehran in April 2018.

Its mass-production line opened in early November 2018 in Isfahan.