TEHRAN (defapress) – The United States has flown four surveillance planes over the Korean Peninsula at the same time, according to an aviation tracker Wednesday, amid heightened concern that North Korea could test-fire a long-range missile as a "Christmas gift" to Washington.
News ID: 79680 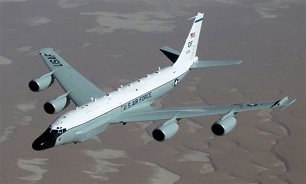 According to Aircraft Spots, the four aircraft -- RC-135W Rivet Joint, E-8C, RQ-4 Global Hawk and RC-135S Cobra Ball -- were believed to have carried out missions over and around the Korean Peninsula between Tuesday and early Wednesday.

The RC-135W and the E-8C flew at 31,000 feet, while the Global Hawk was spotted at 53,000 feet. The RC-135S took off from Japan's Kadena Air Base and conducted missions over the East Sea, according to the tracker. A KC-135R refueling aircraft also flew over the East Sea.

It is unusual for four American surveillance planes to conduct missions around the Korean Peninsula at the same time. That appears to illustrate how much attention the US is paying to an increasingly belligerent North Korea.

Pyongyang has ramped up pressure on Washington to come up with a new proposal in their stalled nuclear talks by the end of the year, strongly suggesting that otherwise it could restart testing of nuclear weapons and intercontinental ballistic missiles (ICBMs).

Warning that the deadline is drawing near, the North said it is entirely up to the US to decide what "Christmas gift" it selects to get, deepening concern the regime could conduct an intercontinental ballistic missile launch.

The North also carried out what appeared to be two rocket engine tests at its satellite site in a possible prelude to an ICBM launch, saying the results will have "an important impact" on changing its strategic position in the near future and will bolster its "reliable strategic nuclear deterrent."

South Korea and the US have strengthened vigilance against the possibility of North Korea firing an ICBM or a submarine-launched ballistic missile (SLBM), or undertaking other types of provocations, military sources said, Yonhap news agency reported.

Green Pine land-based radars were in operation on the ground, while an Aegis destroyer equipped with the SPY-1D radar system was deployed off shore and an E-737 Peace Eye airborne early warning and control (AEW&C) aircraft was carrying out a mission in the air, the sources said.

An ICBM launch or a nuclear test would represent a blow to US President Donald Trump ahead of next year's presidential election as he has boasted of the North's suspension of such weapons tests as one of his key diplomatic achievements.

Trump has warned North Korean leader Kim Jong-un not to interfere with his reelection bid, saying the communist nation could lose "everything." The North said in response that the country has nothing more to lose.

On Tuesday, Trump said he can deal "successfully" with whatever Christmas gift the North sends.

"We'll find out what the surprise is, and we'll deal with it very successfully," Trump told reporters at the Mar-a-Lago resort in Florida. "Everybody's got surprises for me, but let's see what happens. I handle them as they come along."