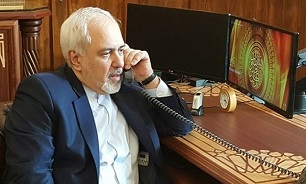 During the conversation on Wednesday, Zarif congratulated Kuwaiti Prime Minister Sheikh Sabah al-Khaled al-Sabah and his counterpart Sheikh Ahmad Naser al-Mohammad al-Sabah on their appointment to their new positions.

Kuwait's new government headed by Sabah al-Khaled as prime minister was sworn in a ceremony on December 17 attended by the country's Emir.

Iranian Deputy Foreign Minister for Political Affairs Abbas Araqchi and Kuwaiti Deputy Foreign Minister Khaled al-Jarallah, in a meeting in Tehran earlier this month, voiced their countries’ agreement on the principle that dialogue between the Persian Gulf littoral states is the only way to reduce tensions and strengthen peace.

During the meeting with al-Jarallah, Araqchi said Tehran’s proposed plan for ensuring security in the Persian Gulf aims to reduce tensions in the strategic region.

He added that a constructive approach to HOPE is a step toward defusing regional tensions, and reaffirmed Iran’s readiness to find a practical mechanism along with all countries in the region to implement the plan.

"Iran believes in a collective collaboration among regional states for maintaining security, and regards dialogue as the sole solution to attaining such a goal and tackling hardships," the senior diplomat said.

Al-Jarallah, for his part, described negotiations as the only way possible to resolve regional crises and emphasized the need for expanding bilateral ties between Iran and Kuwait.

The Hormuz Peace Endeavor was first proposed at the UN General Assembly in New York by President Hassan Rouhani.

Addressing the UNGA late in September, President Rouhani unveiled Iran's initiative for the establishment of peace and security in the Persian Gulf and the Strait of Hormuz, and said, "The goal of the Coalition for Hope is to promote peace, stability, progress and welfare for all the residents of the Strait of Hormuz region, and to enhance mutual understanding and peaceful and friendly relations amongst them."

"This initiative includes various venues for cooperation, such as the collective supply of energy security, freedom of navigation and free transfer of oil and other resources to and from the Strait of Hormuz and beyond," he added.

"The Coalition for Hope is based on important principles such as compliance with the goals and principles of the United Nations, mutual respect, equal footing, dialog and understanding, respect for territorial integrity and sovereignty, inviolability of international borders, the peaceful settlement of all disputes, and more importantly, the two fundamental principles of non-aggression and non-interference in the domestic affairs of each other. The presence of the United Nations is necessary for the creation of an international umbrella in support of the Coalition for Hope," President Rouhani underlined.