Nord Stream Should Not Concern US, It's 'European Matter' 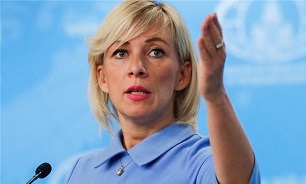 "If the Nord Stream 2 involved some territory belonging to the United States, I would understand Washington's interest in these issues. This is a European matter altogether. This does not concern anyone except for the countries involved in the project geographically or financially," Zakharova stated.

On December 20, US President Donald Trump signed the US defense budget for the 2020 fiscal year which envisages sanctions against companies participating in the construction of Nord Stream 2 and Turkish Stream gas pipelines. Switzerland's Allseas company which lays pipes for the Nord Stream 2 project has suspended work and recalled ships involved in the construction, fearing possible US sanctions.

On Thursday, Zakharova told a news briefing that by prolonging anti-Russian sanctions on December 19 for another six months the European Union again missed a chance to normalize relations with Moscow, according to TASS.

"We are disappointed by the inertia of the European Union’s policy of prolonging sectoral restrictive measures against our country. This is precisely the way we see the EU Council’s decision of December 19 [on the prolongation of sanctions]," Zakharova stated.

Regrettably, the European Union once again missed a chance to improve relations with its biggest neighbor on the continent. Today it is more than obvious that unilateral sanctions do not work," she noted.

She added that the European countries’ losses from the sanctions against Russia have already reached hundreds of billions of euros.

The diplomat expressed the hope that in the EU countries there are "soberly minded politicians" capable of calculating the losses from the sanction standoff with Russia and taking the interests of their own peoples into account.

In 2014, the European Union imposed sanctions on Russia in connection with the events in Ukraine and the reunification of Crimea with Russia. The restrictive measures have been repeatedly expanded and prolonged. Talks on the cancellation of visas and a new fundamental agreement on cooperation suspended. Russian officials were prohibited from visiting EU countries and their assets were frozen. Restrictive measures were taken in the trading, financial and military spheres. In response, Russia imposed a ban on the import of a number of foods from the European Union.

On December 19, the EU prolonged for another six months the economic sanctions against Russia expiring on January 31, 2020.