TEHRAN (defapress) – Expressing his view about ratification of the bill on joining the Combating the Financing of Terrorism (CFT), Ayatollah Amoli Larijani, the chairman of Iran's Expediency Council called CFT a major threat to Iran’s national security and worse than the nuclear deal, JCPOA.
News ID: 79750 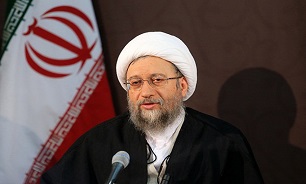 “In my opinion, Palermo and CFT are very dangerous for Iran's national security, with CFT even more so,” he said.

Noting that the JCPOA experience proved the unreliability of Americans and their allies to Iran, he said “CFT is more dangerous than Palermo.”

“FATF has extended its deadline several times. Do you think I will pay attention to such threats?” he asked.

“I will do my job,” he said, “We should consider all the aspects and in my view, there are serious security risks.”

The Palermo and CFT are being examined at the Expediency Council, the body in charge of casting the final verdict on the endorsement or rejection of the two remaining FATF-related bills.

The Paris-based Financial Action Task Force (FATF), a global anti-money laundering body, has given Iran a final deadline of February 2020 to implement a set of four bills to meet the standards set by the watchdog.