TEHRAN (defapress) – Israeli regime's Prime Minister Benjamin Netanyahu announced shortly before midnight on Wednesday that he was quitting his cabinet posts, because of his criminal indictments.
News ID: 79757 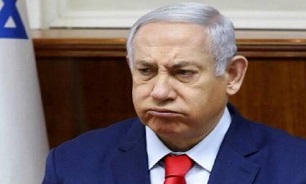 Facing a High Court of Justice petition, Netanyahu announced on December 12 he would drop all his portfolios on January 1 other than his role as prime minister. Besides being prime minister, Netanyahu was social welfare minister, Diaspora affairs minister and acting agricultural minister, and was health minister until Sunday – when the cabinet approved the promotion of United Torah Judaism’s deputy health minister Ya’acov Litzman.

Netanyahu has been charged with bribery, fraud and breach of trust following his indictment in November. He had dismissed the charges against him as “fabricated tales”.

Netanyahu left on Thursday morning for Greece and will only be back Sunday, which is the earliest possible day that new ministers will be appointed.

Meanwhile, Benny Gantz, Netanyahu's main political rival, slammed him for his earlier immunity request, adding that the premier knows he is guilty.