Crushing Response Awaits US for Assassination of General Soleimani

TEHRAN (defapress) – Iranian Defense Minister Brigadier General Amir Hatami warned the US that it will get a crushing response for the martyrdom of IRGC Quds Force Commander Major General Qassem Soleimani.
News ID: 79771 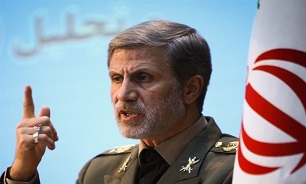 In a statement on Friday morning, General Hatami offered condolences over the martyrdom of Major General Soleimani in a “terrorist attack” by the “bloodsucking US” regime.

He also paid tribute to the martyred general as a brave guardian of Iran who devoted his life to safeguarding the Islamic Revolution and Muslim territories.

“Undoubtedly, such a terrible crime that is hard evidence of the rascality of the Great Satan, the world-plundering US, and of its absolute support for terrorism in the region and in Iraq, will be responded in a crushing manner, and the revenge for the blood (of General Soleimani) shed unjustifiably will be taken against all perpetrators," the defense minister underlined.